5 Coolest Spots in, Around and Under Vienna 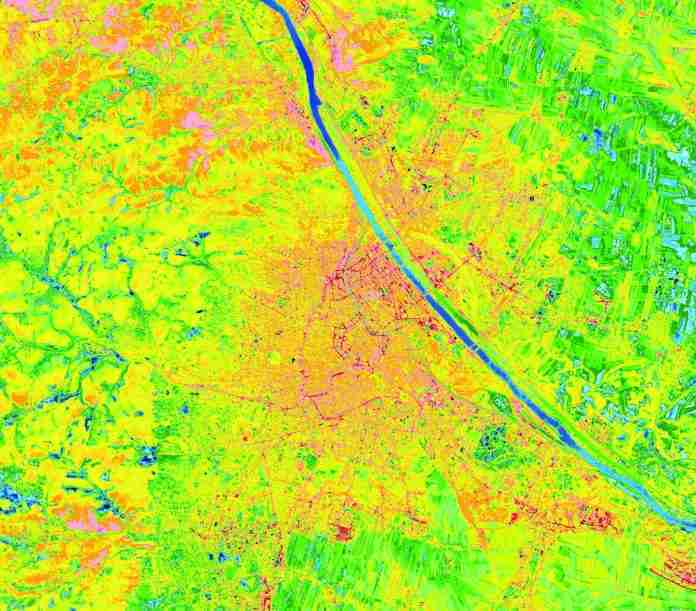 One heat wave has passed, but summer is not over yet. Check out these five ideas for keeping cool in a scorching city.

The Viennese survived summer’s first heat wave with mist blowers, ice cream, and more AC than ever before. For a more eco-friendly fight against the urban heat, the City of Vienna has launched a plan for “a 2.3-million-euro package for greenery on roofs and facades, more fog sprinklers and the transformation of heat islands to ‘cool’ places in the districts.” But these measures will take time.

If a second heat wave hits before the trees grow, remember the poets and try these five favorite places to cool down.

1. ‘Icy Silence’ in the Inner City

Schwarzenbergplatz is on record as the hottest place in the city. But while façade-to-façade masonry traps heat on the streets, the interiors of the massive stone structures offer relief. Twenty-five downtown church buildings, for instance, offer a moment of respite – and the less well-known, the less likely fellow escapees to raise the temperature. The Stephansdom and Karlskirche are tourist hot spots both figuratively and literally – many of the city’s 20 million annual visitors tarry in these famous cathedrals.

Yet the churches’ catacombs – which often charge an entrance fee – hover at 14C even at peak season. These offer a perfect spot for “the living hand of the warm and capable” to cool off while contemplating history, mortality and perhaps a few dark lines of Keats –,obsessed with death in a suitably Viennese fashion. The Michaelerkirche offers a constant 24C upstairs; its Capuchin Crypt features the mortal remains of the Habsburg Monarchs.

While most churches are open to the public, they are still active places of worship – so look out for scheduled masses to join or avoid, and note that other visitors may be there to pray.

2. The Lungs of the City: the Wienerwald

Make like a tree and leaf for the Wienerwald, bough-ing to the forest’s air-cooling powers on one of the many trails out of the city. Rosemarie Stangl, researcher of BOKU, said: “We achieve a real cooling with plants. Within the same square meter you can find two different temperatures with well-placed greens.” Plants evaporate water from the soil, leading to cooling – so any green area will do. Hietzing, the most-wooded district in the city, is thus also the coolest. Tales of Viennese life have long been told here, and you can add your own.

3. A River Runs Beneath It

Equipped with a helmet and a headlamp, the Third Man tour follows the trail of the classic film through the bowels of the city. Guests troop down the original staircase into the Cholera canals, built in the 1830s and unchanged to this day. At a depth of seven meters, learn about the Vienna water and sewage system while enjoying the cool temperatures – and the fleeting whiff of our human eliminations.  A rose by any other name would spell as sweet!

The pilot project arches installed. These will be put up in four places on the shared sidewalks. A good place to be… next summer. Until then, if you are in melt down on Mariahilfer Straße, leap into one of the air-conditioned department stores or cafes for a respite.

Pro tip: Two-thirds of trams and U-Bahn cars are now air-conditioned, so hop aboard. If the throngs are not your thing, rent a stylish e-scooter and zoom at up to 25 km per hour from one between the spots mentioned above. Would-be riders can choose between six different vendors in town, all bookable via app. This breezy alternative lets drivers avoid the closeness of train and tram cars. Even breezier and better for planet earth (and exercise): Ride your bicycle, or sign up for CityBike.

Fausia Abdoel
Fausia Abdoel lives in Vienna and is a marketing manager, writer and translator who holds several degrees and has worked for companies and organizations such as Fairfood International and the Egyptian Tourism Authority. She speaks and writes in six different languages and is currently working on a book.
Online

Help us help you

“Strong media and independent journalism are built on the shoulders of subscribers. Your support means the world to us.“

The coronavirus outbreak affects and challenges your life in big and small ways. Metropole is here for you and we are proud to be your news source during this crisis.

But just as the coronavirus has increased the need for independent journalism, it has also undercut a major revenue source of media companies, ours included – advertising.

We need your support to keep it up – donate or subscribe and #helpushelpyou!

It will be a summer like no other. This year due to corona, many Viennese will opt to spend a good part of their holiday in the city and surroundings. Lucky for us, there are few better places for relaxing in the shade and swim in pools or rivers than Vienna.
Read more
Coronavirus

With summer approaching, new challenges await Austria in dealing with the coronavirus. Here’s all you need to know about current measures and developments, including trusted sources and tips – regularly updated.
Read more
Online

Liberal Freedom and Its Flip Side

The renewed struggle against discrimination is really two struggles: one about rights, the other about opinion.
Read more

It will be a summer like no other. This year due to corona, many Viennese will opt to spend a good part of their holiday in the city and surroundings. Lucky for us, there are few better places for relaxing in the shade and swim in pools or rivers than Vienna.
Read more

With summer approaching, new challenges await Austria in dealing with the coronavirus. Here’s all you need to know about current measures and developments, including trusted sources and tips – regularly updated.
Read more

Liberal Freedom and Its Flip Side

The renewed struggle against discrimination is really two struggles: one about rights, the other about opinion.
Read more

Taste of India | Keep Calm and Curry On

The worldwide Black Lives Matter (BLM) movement has now spilled over onto the supermarket shelves. A look at Austria’s own racially problematic icons.
Read more

Turkish political violence has spilled over on to the streets of Vienna: The hard right Grey Wolves confront an alliance of Kurdish and left wing protesters in the 10th District.
Read more

Continue to the category
Op-Ed

Opinion | What if Foreigners Had Voting Rights?

Having two homes is confusing, and the choice between convenience and (fragile) ideology, even more so.
Read more
People

“I like wearing the white coat. I always pictured them on mad scientists in laboratories – that’s what I wanted to do.”
Read more
Business & Career

Although the current situation is everything but easy on the labor market, things will certainly change again. Prepare now with the tips of our expert in recruiting.
Read more
Food & Drink

Small and Cozy, Eating at Patrick Sowa’s Seidengasse 31 Is Like Having Dinner in...

Small and cozy, eating at Patrick Sowa’s Seidengasse 31 is like having dinner in your living room.
Read more
Diplomacy

From Schrödinger’s Cat to Eisenhower’s “Atoms for Peace,” Vienna’s IAEA is At th...

Even without a single nuclear reactor, Austria plays a vital role in ensuring the safe and peaceful use of nuclear energy.
Read more