How the US Army helped preserve the famed Lipizzaners in the final days of WWII.

Weeks from the end of the Second World War, a rogue unit of the American Army slipped across the lines into the Sudetenland on a clandestine mission to a secluded horse farm. For housed at Hostau – today Hostouň in Czechia – were not just any old horses, but the Lipizzaner breeding mares of Vienna’s famed Spanish Riding School.

Risking conflict with their Soviet allies, Colonel Hank Reed and the 2nd Cavalry Regiment had decided they couldn’t let this prized asset slip from their grasp. As the rattle of gunfire and rumble of tank tracks approached, the remnants of the Wehrmacht stationed at Hostau scattered from the stable blocks. Without firing a shot, they surrendered. The horses fell cleanly into American hands.

Why the American military invested precious resources to save this stable is the subject of Mark Felton’s pacey new history, Ghost Riders. Drawing on interviews with surviving veterans and their relatives, as well as military archives, Felton tells the story of Operation Cowboy: how American intervention pulled the riding school back from the brink of extinction.

The school’s iconic Lipizzaner stallions – “clever, sturdy, noble of spirit” – had been deemed vital to Vienna’s morale during the war. Even as Allied bombs fell, the Nazi regime refused to evacuate them, until finally, in February 1945, they were transferred to Sankt Martin im Innkreis in Upper Austria. But the mares had left for Hostau three years earlier, where, alongside thoroughbreds and the royal Yugoslav Lipizzaners, the Nazis planned to breed the perfect warhorse, unrivalled across the world.

By the time Reed and his cavalry regiment learned about Hostau, the riding school was already facing a shortage of young stallions. And now, with Nazi forces only months from surrender, the future of one of Vienna’s cultural treasures was in jeopardy. Czechoslovakia would fall within the Soviet sphere. As the Red Army closed in from the East, many feared the mares would be used as carthorses, or shot – to end as “horse burgers for hungry peasant soldiers.”

Initially reluctant, the Americans were soon swept up by the romance of the Spanish Riding School. Reed – hoping to prove to his commanders that horses were still a viable tool of war – decided that “to simply allow the Hostau stud … to fall into Soviet hands would be a sacrilegious act.” Something had to be done, and done fast. General George S. Patton, a former cavalryman marked by his virulent anti-communism as much as his love of horses, gave his blessing to the operation. But, he made clear that Reed’s troops were on their own.

Ghost Riders tells the story of this daring rescue, including how German soldiers cooperated to save Hostau and how US forces rushed the Lipizzaners out even as they faced down Soviet troops, who believed the stud farm was rightly theirs. Written as popular history, Ghost Riders is cinematic: Felton has an eye for detail and an ear for
dialogue (some re-created from letters and memoirs).

Still, sometimes his prose manages to get the better of him, especially describing military operations, when a schoolboy’s enthusiasm for tanks and guns would be a help. In the end, 219 Lipizzaners were returned to the Spanish Riding School. After the war, the stallions went on an extended tour until, in 1955, they were able to return to
Vienna following Austrian independence and the Allied withdrawal. And there they have remained. “The United States,” Felton concludes, “could take pride that it was their men who had risked life and limb to save this ancient but fragile jewel of European culture from the fires of war. 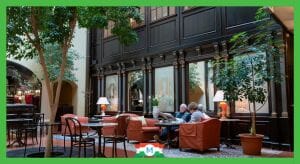 The Taste of Hungary in Vienna