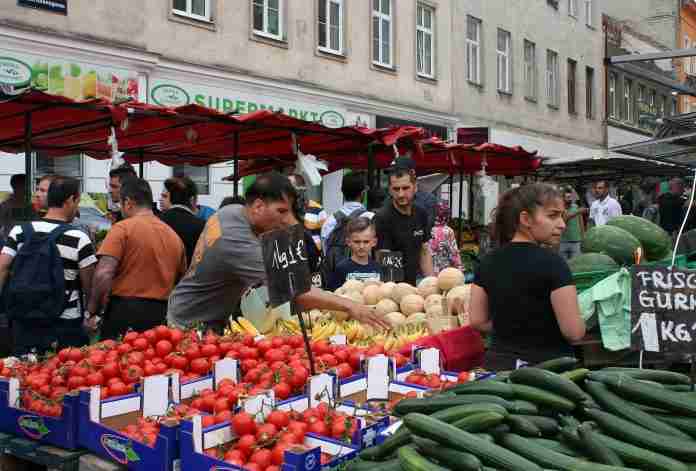 While Vienna’s inner districts will never lose their allure, Brunnenmarkt and its vibrant surroundings can offer an edgier alternative, providing a compelling and stimulating model of integration.

If you’re accustomed to the glitz and Old World charm of Vienna’s inner city, stepping out of tram No. 46 on Brunnengasse can transport you to another world: A sea of market stalls opens up in front of you, selling produce for the fairest price in town; the locals going about their shopping seem to be from every conceivable nationality, with the occasional hipster trying to purchase okra and couscous; the scents of the Balkans and Orient waft around you as stall owners loudly promote their wares. It’s easy to forget you are still in Vienna.

Bordering the Gürtel, Vienna’s second defensive wall until the 1870s, Brunnenmarkt originally came to fame for the largest number of taverns and wineries in Austria, evading alcohol tariffs by being outside the city limits. First mentioned in the 18th century, the open air market is among Europe’s largest, providing fresh food for the historically working-class area’s inhabitants. As demographics shifted, the area has changed: Brunnenmarkt is home to a sizable immigrant population with the Turkish and former Yugoslav communities the most visible; in addition, young students and artists have been flocking here in recent years, drawn by low rents, affordable food and the relative proximity to the inner districts.

This diverse community contributes to the market’s distinct atmosphere: Ethnic specialty stalls like the African Meat Joint are only steps away from the traditional Alpine cheeses at Vorarlberger Käsestand 97, beautifully coexisting as a United Nations of produce. If you’ve come on an empty stomach, fear for your waistline as the options are countless. Kent has long been a favorite among market folk and nightcrawlers alike, with a rich selection of authentic Turkish cuisine. The neighboring Bäckerei Trabzon is also highly popular, baking fresh bread in its huge brick oven at all hours; in addition, its baklava is to die for. For those unconcerned with current health food trends, Halis Börek Salun is arguably the best place in town to enjoy the greasy-but-satisfying Balkan comfort food; at merely €2 per börek, it’s filled many a starving artist’s belly. A short walk farther down, you’ll find the Bücherschrank right outside the Brunnenmarkt’s extremely busy Hofer: a cabinet where you can add or take books as you please. A testimony to the neighbourhood’s many cultures, you can spend minutes rummaging through rows of second hand books in German, English and sometimes even Turkish.

Also worth mentioning is the humble 18th century Pfarrjubiläumskirche right on Neulerchenfelder Straße; now the spiritual home of Vienna’s Serbian Orthodox community, historical photographs and trivia are displayed on its side, retelling the building’s history. In contrast to the baroque church, the rest of the avenue seems transplanted from the Levante, with stores like Istanbul Textilien selling fabric by the bolt for every purpose and occasion, leaving any sewing enthusiast spoiled for choice.

Delicious produce isn’t the only draw of the area. Grundsteingasse runs perpendicular to the market, a seemingly quiet street with several boutique galleries that occasionally come to life when contemporary artists stage their works. Showroom Ulrike Hrobsky regularly hosts some of the Vienna Art Week’s exhibitions, offering an opportunity to get better acquainted with the local art scene. A friendly local remarked that this is the best part of Brunnenmarkt. “When I moved here,” she said, “I realized this is where the real people live. They’re always out on the streets, interacting with one another, creating a community.” She suggested I peek into any open door since Vienna’s inner courtyards almost always conceal a story (be warned though that sometimes, it’s private property). That is how I stumbled upon Zum Goldenen Kegel, a charming hostel with an enchanting courtyard filled with lawn furniture and multicolored strings of lights. More than 300 years old, it’s the oldest building in the district: Renovations unearthed the original window frames and wooden ceiling beams embellished with paintings and ancient beer labels; passers-by are welcome to take a glimpse at their historical artifacts.

While Vienna’s inner districts will never lose their allure, Brunnenmarkt and its vibrant surroundings can offer an edgier alternative, providing a compelling and stimulating model of integration. Between young urbanites fleeing gentrification and Ottakring’s sizable immigrant communities, the area is buzzing with urban art, fueled by Turkish and Balkan delicacies and ample beer from the nearby Ottakring brewery. Wild and rough around the edges, Brunnenmarkt is undoubtedly alive – and ready to write the city’s next chapter.

Eden Vered
Born in Israel in 1995, Eden grew up in Japan and worked as a classical violinist until joining Metropole as social media Assistant and journalist.
GeneralPrint EditionsNovember 2018LifestyleVienna by DistrictNewsVienna News
Previous articleCulture Music | November
Next articleCulture Screen | November