Arriving in Austria as a refugee, Ali Mahlodji lived in 13 apartments before he was 10 years old, dropped out of school at 18 and worked over 40 jobs before founding Whatchado, a platform that helps people find their calling. Here’s how he found his.

Back in 2009, 27-year-old Ali Mahlodji could be seen on any given workday in a suit and tie driving a company car. Sun Microsystems had given him the ride and a fat paycheck as a Global Systems Engineer – a title he still doesn’t understand. As far as his friends were concerned, the former refugee and high-school dropout had officially made it.

“I was totally unhappy,” Mahlodji told METROPOLE. It’s a late summer day and the suit and tie have long surrendered to a baseball cap, sneakers and an infectious grin. He speaks excitedly about the pitfalls and encounters that led him to becoming CEO of Whatchado, a storytelling video platform meant to help people shape their career path. Essentially, it’s an online collection of videos in which people answer questions about their job, life and worldview. Its aim is to give people a feel for what a certain job entails and what kind of person does it. The company has made significant waves within the regional startup scene and is currently expanding on a global scale.

Between flights to Hong Kong and a visit to the Alpbach European Forum, Mahlodji met us at his childhood haunt in the 18th district, Türkenschanzpark. The countless smiling faces he posts on social media bear witness to the many people he meets on his mission to get “everyone in the world” to tell their story on Whatchado.

Take nothing for granted

His own story is almost Dickensian. In 1984, he and his parents fled persecution in Iran, sneaking over the green border to Turkey in the middle of the night before eventually making it safely to Austria. They stayed in the Traiskirchen refugee collection center before moving to housing in Baden and finally Vienna. He had nightmares about Traiskirchen long into his adolescence – scenes of crowds of people pushing and arguing.

His parents – both academics – had a second son after arriving. Before Ali turned 10, the family had lived in 13 apartments. His mother mopped floors at an architecture firm and his father stocked the shelves at a bulk grocery retailer. The experience shaped Mahlodji’s world view. He remembers getting his first pair of Nikes; he treasured them, refusing to take them off and even wearing them to bed.

“My mother always told me we had everything back in Iran and now we have nothing. Never forget
that you have to fight for everything yourself and never take what you have for granted.”

As a 14-year-old student, Mahlodji felt a lack of direction when it came to career choices. In Austrian schools, there is something called a “friendship book” or “poetry album”, with pre-printed questions like “What’s you favorite color?” or “What music do you like?” Being himself on the cusp of choosing his path in life, he envisioned just such a book for adults: It would be a “Handbook of Life Stories” and include people in all kinds of jobs all over the world. Anyone looking for direction could borrow it for free from the library.
The path he ultimately took was more hands-on. “My father always told me to find out what I don’t want to do, so the only way to do that was to try things out.” And so he did, working over 40 jobs until he founded Whatchado. After he quit school right before his Matura (high school exit exams), he worked at McDonalds mopping floors, the Sunday shift at Billa supermarket at the Franz Josef train station, and even mixed powders at a pharmacy. After chemical burns scarred his hands, he decided he needed an education to find a job he liked.

He took evening classes while working full time and completed a high school degree with an emphasis on software engineering, followed by a Bachelor of Sciences. He then received a traineeship at Siemens, which led to Sun Microsystems. “I was a real asshole,” he says of his time there, with a shrug. “I had watched my parents go through so much to give me this life and I was acting like I had made it just because of my fancy business card.”

While teaching Media Design on the side at the Haizingergasse high school, he once again was reminded of his own trouble finding his way as a teenager. Now that he knew a bit of programming, he began working on his Career Stories Handbook. “I registered Whatchado and went forward with the concept.”

The rest is history.

In three and a half years, the company has grown from 4 to 40 employees, the majority of them women. Whatchado now has a collection of roughly 4000 videos, 300 of them in English, spanning 6 continents and over 50 countries. Mahlodji has relinquished the position of CEO to his co-founder Jubin Honarfar,
retaining the title Chief Storyteller. Initially approached by universities and other educational institutions, their primary clients are now companies wishing to profile their employees for recruitment purposes.
“At first we said ‘Wait, stop. We ask the questions, otherwise the whole concept doesn’t make sense.’ But the companies wanted that: someone from the outside profiling their staffers so it’s more authentic and accountable.” For every company video they are commissioned to do, like the ones for Swisscom or the German supermarket chain EDEKA, they make sure to do one unpaid profile themselves.

It’s not hard to see why people respond to the concept. Most people have looked for career change and gotten lost along the way. Mahlodji invested so much time and energy because he was thinking about all the people who could benefit. He knew exactly what being directionless felt like. Telling the story, he paused and smiled. “I actually built the thing for myself.”

2000 stories were online a year later 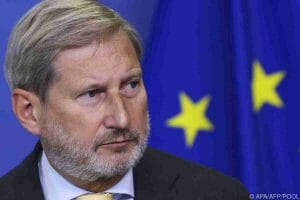