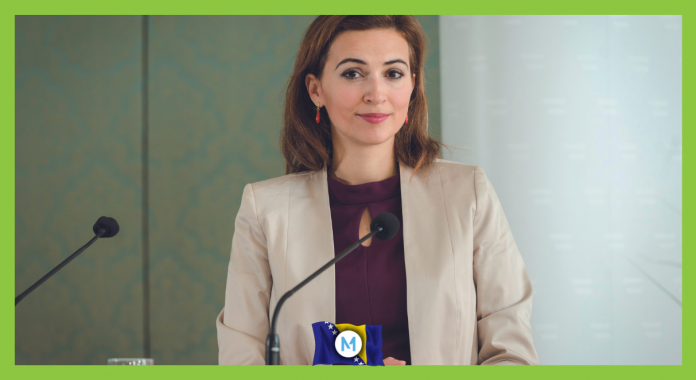 When they came to Austria, they were refugees. Today, as Bosnian politicians they are actively shaping their new home.

All who have left their homeland in search of a better future have, like most of us, thought about what would become of us, and dreamed of what we wanted to be one day. This was our Austrian dream. Arriving in Austria, we wondered if this was even possible.

“I am an Austrian, a Bosnian and a citizen of the European Union.”

The best example of the realization of this dream is the current Minister of Justice Alma Zadić (Greens), the first person of a migration background, and the first Bosnian, to rise to such a position.

The obstacles came early. Zadić remembers the dismissive words of her fourth-grade math teacher: “Anyway, you won’t be able to do it.” Nine years old and new to Vienna, she was the only immigrant in the class and the only one whose mother tongue was not German. But that did not stop her. “This is not Bosnia for you!” one of the councilors told her during a speech in the National Council. Today, she is his minister.

Born in Tuzla, Zadić’ success is a measure of how important those who came to Austria during that unfortunate war have become in Austrian society: “I am in politics to give back to society what I got – an opportunity!” Zadić says. Many of those are using political activism to fight for the rights of those who may not be native here, achieving things that can only be done with a lot of effort, work, and discipline.

“For myself,” says Zadić, “I say I have three identities – I am an Austrian, a Bosnian and a citizen of the European Union.” Other politicians with a Bosnian background told us they see themselves following in her footsteps. They will most certainly be heard in Austrian politics one day.

“My example shows that, working hard, migrants can get into the parliament.”

Bedrana Ribo, originally from Travnik, arrived in Austria with her parents and younger brother back in 1992. Assuming that the war would end soon, they planned to stay only a few months. Today, some 30 years later, Bedrana is a member of the Austrian Parliament, a story almost as unbelievable as that of Minister Zadić. “Now there are two Bosnian women in the Austrian parliament, speaking Bosnian with each other.”

Before her political engagement, she has worked in a real estate management company and an architectural office and has earned her master’s degree in global studies: We all get opportunities that we simply must take. I was cleaning houses next to my studies because my parents didn’t have money.“

In 2011, as she was distributing leaflets to protest the construction of a controversial hydroelectric plant in Graz, the Greens approached her and asked her to join the party. Very quickly she became a local representative in the Gemeinderat (Municipal council), where for five years she was in charge of social and financial issues. On the spur of the moment, she decided to run for the Nationalrat (National Council):

“I never believed I would be a part of the Parliament, but it has now been two years. Sharing my story, I want to show young people what is possible if you make the effort.”  Along with her party, she advocates for equality and equal rights, and believes that people like her are role models for people from Bosnia: “I am one of them, I speak their language and I know their culture, we are connected by our common past and I have suffered a lot, just like them.”

The well-being of society requires diversity in politics, she believes, which is why she encourages everyone to get involved, one way or another: “We are the change!”

Still, she says, people with a migrant background have to work much harder to get recognition in Austria: “I love this country and this is where I want to grow old. However, I cannot fully identify as Austrian, but nor as Bosnian. It’s complicated””

“My escape from the war has shaped my political work.”

Fleeing with her mother and sister, Šegalo left occupied Sarajevo in 1992. Today she remembers that period as the most difficult, most emotional period of her life, experiences that have greatly influenced her political activity. While studying political sciences, she fell in love with the idea of ​​social democracy, so she joined the SPÖ. The 37-year-old is committed to taking on the problems of integration, racism, and gender equality.

Since 2018, she has been a member of the District Council in Wien-Margareten, with the personal goal of returning to society all the support she and her family received from the very beginning of their life in the Alpine Republic.

One law she hopes will be enacted is the one empowering non-Austrian citizens to vote. Until then, she is especially focusing on fighting for the rights, worries, fears, and desires of migrants in everyday life. Šegalo believes that Austrian politics could learn a lot from the example of BiH.

“With its experiences of conflict, restrictions, and nationalism, I want to show how very important social security and respect are for all people,” she says. “Unfortunately, our homeland is an example of how nationalist movements, disguised as patriotism, can weaken the society.”

Apart from her active work in politics, where she is mostly focused on the fight for women’s rights and anti-fascism, Šegalo works in the women’s communication center ega: frauen im zentrum. The work of the center is oriented towards culture, communication, and networking. Through her efforts, she managed to connect Austrians with the Bosnian community, and thus presented several artists from Bosnia and Herzegovina.

“Human migration should be accepted as a fact, but also as a challenge.”

The only Liberal in our presentation is 45-year-old Selma Arapović who escaped from Višegrad with her family to the Upper Austrian city of Lohnsburg. She attended high school in Ried im Innkreis, while she completed her architecture studies in Graz and Barcelona and later moved to Vienna with her husband. Like many important politicians, she began her political activism while still a student, where she was a member of the student council at the Technical University (TU).

Upon her return to Vienna from a stay in Dubai in 2013, she was greeted by an election campaign for the National Council. Frustrated by the use of the term Migrationshintergrund (“migration background”) in relation to education, health systems and social housing, she started following the work of NEOS, soon joining the party herself. Since 2015, she has been actively involved in Viennese politics, where for five years she worked as a district councilor in Wien-Leopoldstadt.

“Vienna has a tradition of migration that goes back centuries, not just today.” While also a challenge, she says, migration should simply be accepted as a fact.

“Personally, I think reducing the economic gap between citizens – with and without a migration background – is incredibly important.”, she says, as party speaker for housing, renovation, and urban development. She hopes Austria will see a higher number of politicians with migration backgrounds: “Get involved! And run for office!”

“People need to be given a platform and a support space.”

The Bosnian War also drove Emir Dizdarević from Bijeljina to Austria in 1992 with his family. Austria had not been a goal in itself but was the first safe country to accept them. He could not have guessed that 29 years later he would be in the politics of the country that had provided a roof over his family’s head.

Just as he came to Austria by chance, he got involved in politics by chance, as well. While challenging a Russian Law that criminalized homosexuals, protesting in front of their embassy, members of the Greens approached him to talk, and he fell in love with Green politics. For three and a half years, he worked as a speaker for integration at the Greens’ Club at City Hall, where he set out to collaborate with other migrant communities.

Creating a platform and space to support them was and is his most important goal. He is also very proud of his party’s project, the so-called “Jugös,” a word-play between Jugo and Österreicher (Austrian), which aims to bring together the best of the former Yugoslavia for the benefit of the community, as well as to fight for the right to vote for all Austrian residents in the upcoming elections.

“With the Green Jugös project we are fighting for voting rights of all residents.”

Like Ribo, the 42-year-old Ajla Lubić was born in Travnik. As the war started in 1992, when she was just 13, she took her first steps in politics, collecting signatures for a petition to end it. In 1994, she fled with her parents to Austria. Without any knowledge of German, she was socially excluded in high school and even a victim of mobbing.

So she decided to get involved in politics, joining the Greens, because it seemed to be the only party fighting for solutions, not just to environmental problems, but also social ones. She became active in a major initiative for single mothers and is now working for the Green Women of Vienna (Grüne Frauen Wien), a female organization of the Greens. In addition, Lubić is a deputy delegate to the Federal Congress of the Green Party and a member of the Board of Women of the Greens in Vienna.