Walking downhill from the Freyung, the elegant Jugend-stil entrance of the Hotel Orient at the bottom of the Tiefer Graben appears out of the shadows. You ring the bell; the door opens. Before stepping inside, you scan the sidewalk hoping no one notices – at least no one who would recognize you. To be extra careful, you look up, as well, to the Hohe Brücke (High Bridge) on Wipplinger Straße, where someone in a trench coat might be focusing his telephoto lens down on the street below.

Because, if truth be told, passing through this discreet doorway can only mean one thing: a rendezvous with Romance and secretive hours of carnal delights. The Hotel Orient is Vienna’s legendary palace for lovers’ trysts. Many are clandestine, tactfully off the radar, and the others – well, let’s just say, it’s fun if they feel that way.

In Vienna, staging is everything

Once inside the lobby, you’re back in the fin-de-siècle Vienna of Arthur Schnitzler and Josephine Mutzenbacher, every surface covered in the opulent red-velvet plush of Makart-style pageantry that carries through the hotel – far from prying eyes and as cossetted as a mother’s womb. You feel safe here. You are anonymous – even if you serendipitously ran into your next-door neighbor (not so improbable in this little village of ours), your mutual secret would remain intact. You sigh a deep sigh, your eyes alight. Suddenly, you are invincible, your sexual-fantasy version of yourself.

However, it is secret assignations that fill the rooms at the Orient – according to legend, at least, as no official statistics are kept. To reserve a room or register as a walk-in, you need only give a pseudonym. Though credit cards are accepted, payment in cash is the general rule. No questions asked, no identification required. Even if you’re a regular, the staff will treat you as a complete stranger with each subsequent visit. They are unfailingly polite and as mum as the brocaded walls. But oh, the stories they could tell!

It has been said that every Viennese has spent time there, or at least wanted to. The newspaper Falter lists “having wild sex at the Orient” as number 36 of the 100 things a newcomer must do to become an “echter Wiener” (a bona fide local) – as true today as three centuries ago, when the original establishment on the current hotel’s site soon became a city institution. 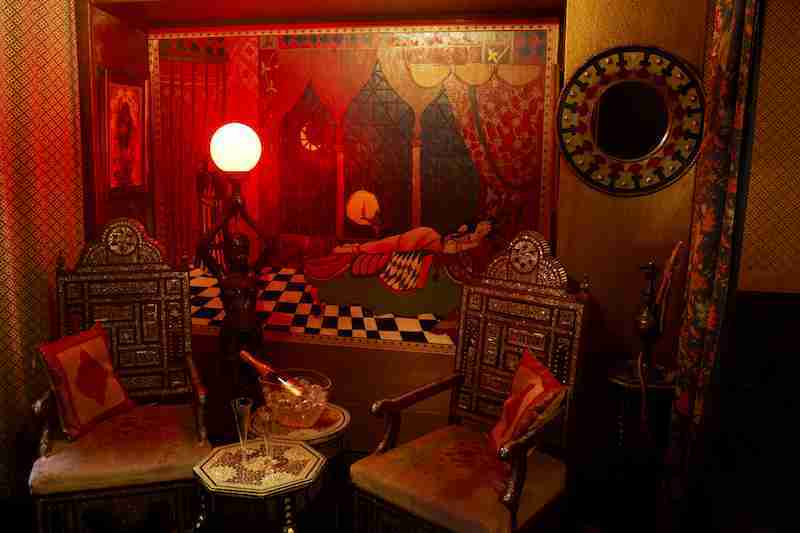 In the 17th century, the Tiefer Graben was a side branch of the Danube canal. Various wares and sundry contraband from the East were conveyed upriver and deposited here, thus giving the current hotel its name. But long before its current 1896 façade was built on the newly-covered canal, the hotel started life as a boatman’s tavern, where those beginning or ending their journeys would avail themselves of the flophouse’s offerings: liquid, edible and (above all) sexual.

Prostitution was an accepted and integrated facet of life in Vienna, until the onset of syphilis and the counter-reformation of the 1600s led to a more puritanical moral code:  The resulting regime of chastity and superficial piety likely explains why anonymous, hourly hotels came into being. Don’t ask, don’t tell. In the repressive Biedermeier era of the early 1800s, one’s sins had to be well hidden.

While imperial aristocrats could carry out sexual affairs in more luxurious dens of iniquity, such as the posh Séparées at the Hotel Sacher, the Bourgeois needed only a bed and privacy. Even well into the 20th century, it was taboo to bring members of the opposite sex into the segregated housing for students or singles. This was the heyday of the Stundenhotel.

And so it remained, up through the sexual revolution of the 1960s, when sexual mores relaxed and most hourly hotels became dens of seedy prostitution. However, the Orient managed to survive intact, if a little worse for wear. In the 1980s, the self-crowned “Nightclub King” of Vienna, Heinz Werner Schimanko (the impresario behind the Eden Bar and several less reputable red-light establishments) bought the hotel and renovated it while preserving its historical ambience. Each suite was given its own theme – ranging from the “Black Tulip” (single room with shower: €63 for three hours) to the “Mona Lisa” (standard suite with large bath: €83) to the grand “Kaiser Suite” (with lavish bath and marble fireplace: €95).

In every room, you can count on ceiling mirrors mounted over bed and bath, frosted-glass windows, deep-pile carpeting, and lots of red-velvet wall covering and drapery. This is perhaps the only instance where opulence adheres to the modernist maxim “form follows function.” Room service, contacted by mid-century rotary-dial phone, offers diverse sparkling wines and other beverages, yet only one classic aphrodisiac snack – pâté de foie gras with toast and butter.

This was certainly not the first instance of the Orient’s playing muse to the arts. Some scenes in Orson Welles’ The Third Man were filmed here (Welles and the film’s screenplay author, Graham Greene, are said to have been hotel guests). Contemporary musician-author Ernst Molden lived in an upstairs room at the hotel for a year while writing his debut novel Die Krokodilsdame (The Crocodile Lady). For his 2007 book, Wie War Es Wirklich?, the newspaper columnist Georg Markus fantasized a conversation in the Orient’s bar with the infamous turn-of-the-century Viennese whore, Josefine Mutzenbacher, whose scandalous, ghost-written narrative is attributed to Bambi author Felix Salten (yes, that Bambi).

Though the hotel’s website proudly boasts these and other prominent guests, you needn’t worry that you will be publicly betrayed. Unlike its thousands of mortal guests tactfully forgotten through time, the Orient will live on, thanks to its non-judgmental, discreet vow of silence.

Michael Bernstein
American expat Michael Bernstein moved to Vienna in 2001, abandoning his previous career in arts administration. He is now a freelance writer, editor, translator and Internet Marketing consultant. He was a regular contributor to inventures.eu — an E-zine about the Austrian/CEE startup scene — and was Lead Editor for its 2015 Ventures Almanach. Photo: Visual Hub
LifestyleCity Life
Previous articleInternational: The Real Challenge
Next articleOn Screen: Hail, Caesar!