In A Rich Brew, Shachar Pinsker makes a convincing case for the role of cafés in fostering a golden age of Jewish culture.

In any guidebook about Vienna, the Kaffeehaus holds a place of honor, a sort of people’s club, open to all, where the rich exchange of friendship, creativity and ideas that became the Wiener Moderne found its most fertile ground. The fin-de-siècle coffeehouses were places of companionship and conversation, but also of retreat, of reading and writing and sometimes even revolution.

It was at Café Landtmann, just across the Ring from the university and a short walk from his apartment on Berggasse that Sigmund Freud would go to read the newspapers or, one imagines, write up his case notes. If he wasn’t there, you might try Café Central on Herrengasse, where he met with fellow psychiatrist Alfred Adler, while in another corner, philosopher Egon Friedell might be thick in theater talk with dramatist Hugo von Hoffmannsthal; where Leon Trotsky played chess and penned articles for Pravda, and writer Peter Altenberg exchanged bons mots with fellow feuillitonist Alfred Polgar.

“The Café Central is not a coffeehouse like other coffeehouses, it’s an attitude to life,” Polgar wrote in his Theory of the Café Central. “Its denizens are mostly people whose distain for their fellow man is as intense as their longing to be around them, who want to be alone, but need company to do it … are short of ideas at the Central, but have even fewer anywhere else.”

It was this history that earned UNESCO status in 2011 for Viennese Coffeehouse Culture as a “protected intangible cultural heritage site.” Dating back to the 17th century, Viennese coffeehouses are “given distinction by a specific atmosphere,” the citation read, “where time and space are consumed, but only the coffee is found on the bill.” It was an unprecedented choice, unique in the world, and a source of no little local pride.

But is it so unique? And is the claim of historical continuity justified? Well, yes and no, writes Shachar Pinsker in A Rich Brew: How Cafés Created Modern Jewish Culture. What this picture obscures are “the transnational origins” of a tradition brought to Vienna by the Turks and Armenians and enriched by the wave of late 19th century Jewish immigration from across the Empire. Arriving in Vienna, Jewish men – and it was almost exclusively men – often found a second home in the Kaffeehaus.

“These urban cafés were especially alluring spaces for Jewish writers and members of the intelligentsia who were migrants, exiles or refugees,” Pinsker writes. Often living on the edge, they could make friends and professional contacts. There, Jews and Gentiles socialized together, offering the chance to assimilate into the wider culture – a hallmark of Jewish modernity. It was a kind of “third space” between the public and the private, migrant and native, idleness and productivity, the real world and the life of the mind. All this is certainly Vienna’s cultural heritage, but not hers alone. These were features of cafés in many of the great European cities, and of Central Europe in particular.

So Pinsker takes us on a journey, beginning with the roué charms of Odessa. One of the youngest of the great European cities, Odessa was founded as a free port by Catherine the Great and settled almost overnight by migrants offered land, tax exemptions and religious freedom. Along gracious boulevards designed by French and Italian architects and managed by tolerant administrators, Odessa flourished. And so did the Jews. With no “old society,” there was no need to assimilate. Jews belonged as much as anyone.

Odessa became a “Paris of the East,” an intoxicating blend of sophistication and decadence swirling around cafés, with poetry and theater in the front room and shady deals in the back, where you could “live like a god” with “hellfires burning” around you. To a traveler from Vilnius in 1861, the Café Richelieu was like “a Jewish club,” where the patrons “argued, read, reasoned and played” and “felt absolutely at home.”

Each city had its own café culture: Warsaw’s colder climate and cramped old city produced smaller, plainer cafés – but still lively places of exchange, or even revolution, as in 1863-64, when uprisings against the Russian Empire were planned in Warsaw cafés.

In Berlin, the coffeehouses caught on later, from the fashionable Café Bauer to the stripped-down Café des Westens that became home to the modernist avant-garde.

In New York and Tel-Aviv, coffeehouses were in a sense themselves mythic, already displaced re-creations of a culture left behind and largely lost. And yet… Well, you decide.

In the modern era, the Vienna Kaffeehaus endures as a place to meet friends or do a little business; it’s often a preferred neutral ground that is neither your office nor mine. Some of the famous ones, like Central or Mozart, suffer alas from a high tourist-suffocation rate. But real life still happens at most, from Landtmann, Tirolerhof, and Prückel to countless others in quieter corners of districts 3 to 9.

In the 2nd district of Leopoldstadt, once the Jewish “quarter,” the great cafés are only a memory. The Café Reklame and the Café Astoria on the Praterstraße were centers of Jewish cultural life, “a space of connection to other cities, …that brought migrant writers, artists and intellectuals together.” In retrospect, the sense of otherness, along with the tensions of anti-Semitism, were perhaps inevitable for Jews in Vienna: In just 40 years, the city’s Jewish population increased some 28 fold, from 6,217 in 1857 to 175,000 in 1910. Even with Franz Josef’s Ausgleich in 1867, granting Jews legal equality and access to all professions, they could not be absorbed fast enough. The poor were resented, the bourgeoisie only more.

In the end, says Pinsker, the secret of the cafés – wherever they sprang up – was in the interplay between myth and reality that all cities are built on. Still, the Austrian capital was different. “Vienna is a city of functioning myths,” wrote Friedrich Torberg, in his Treatise on the Vienna Coffeehouse (1959). “What is typical of Vienna, and only Vienna, is that here legends still work, and will continue to do so, as long as reality is guided by them.”

However, one final word of warning: This captivating tale of Jewish intellectual life, fueled by caffeine and good company in cities across the world, is tarnished again and again by lapses into stifling academic jargon that saps the life out of the argument. Terms like “homo-social spaces,” “contested meanings,” the “enunciation of identity” lead quickly into a quicksand of category jargon from which no sane reader can emerge unscathed. Use these nonsense terms among yourselves if you must, dear scholars; when you write for the thinking public, please honor the language we love. 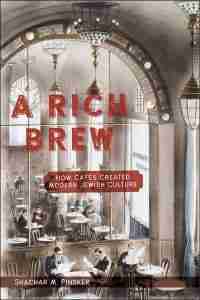 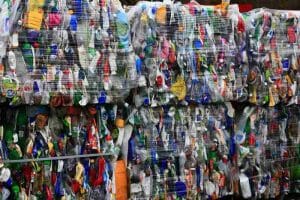 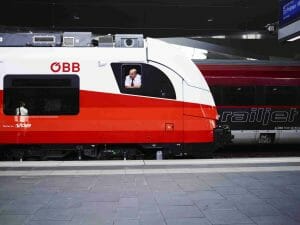 All Aboard the Vienna Night Train

Stuwerviertel | A Neighborhood at a Crossroads