On Friday, Nov. 1, the complete ban on smoking in bars and restaurants takes effect, ending the “Austrian solution” of separated, closed off areas that has defined life across country, and particularly in Vienna, for a decade. The divided-space solution had been, to a real extent, the handiwork of Helmut Hinterleitner, then head of the Trade Association for Restaurant and Bar Owners at the Austrian Federal Chamber of Commerce, who ably defended the interests of the branch for two decades before “retiring” to his home state of Carinthia in 2015.  We reached Hinterleitner at his four-star Ferienhotel Schönruh, on the Faakersee.

“I still think our solution was brilliant, genial,” Hinterleitner said with a smile in his voice. “It has to do with freedom of choice, for the restaurant or bar owner, and for the customers.  What we had was so clear: The guests could always choose where they wanted to go, what sort of atmosphere they wanted.” Even the Constitutional Court agreed, he pointed out, referring to the June 18 decision, which affirmed the constitutionality of the existing arrangement, which saying the final decision should be left to Parliament.

“Unfortunately, the politicians decided differently,” Hinterleinter said. The biggest irony: Hospitals are not only allowed, but required to provide separated smoking areas in their waiting rooms. “So why not in a restaurant?” he wondered. “It is always better to offer alternatives.”  A decade later, he said, “it is still the better solution.”

What follows is the scene of a press conference Hinterleitner held at Café Korb back in 2007, in his original campaign for divided spaces.

The protest against the anti-smoking law takes shape.

It was Oct. 23, 2007, a Tuesday morning. A man and a woman were deep in conversation over a mélange at the Café Korb preparing for an up-coming university lecture, when suddenly a flock of dark-suited officialdom descended on the room, pursued by a second rank of cameras, microphones and spiral notebooks, ready to record their every word.

The “suits” took several seats along the banquette beside the academics, while the reporters sat in the facing chairs, set up their mics, switched on the TV spots and went to work. The “suit” on the end took out a pack of cigarettes, offered them to his colleagues (who accepted) to the journalists (who laughed but declined; their hands were full) and, turning graciously to his right, to the academics (who also declined). Matches were stuck, and cigarettes were lit, as the men each took a deep drag. And the questions began.

“Why is the new Anti-Smoking Law such a problem for your industry?” asked a reporter, pushing the microphone right under the chin of Helmut Hinterleitner, head of the Trade Association for Restaurant and Bar Owners at the Austrian Federal Chamber of Commerce.

Hinterleitner took another drag, while he formulated his answer…

“Let’s get out of here,” whispered the man to the woman, who was leaning slightly left so as not to miss a word. “Leave?,” said her raised eyebrows. He must be joking! The situation was simply too alluring. He shrugged; they stayed. After all, smoke or no smoke, how often do you get a front row seat in the theater of the cultural wars?

“Death blow to our members”

Hinterleitner cleared his throat. He was frustrated, he admitted: Some 90% of all Austrian bars, restaurants and coffee houses had already set aside no-smoking areas voluntarily (which undoubtedly had cost him a lot of hours, passion and persuasion). He was convinced that a total ban on smoking in these Lokale would have severe economic consequences.

“This will be a death blow to our members,” he said, the tension showing through his polished manners. “This will put 15,000 jobs and hundreds of businesses at risk!”

“Better them than me,” groused the man at the next table under his breath. “I can hardly breathe in here.” His colleague laughed. She hardly noticed it, and though not a smoker, she actually enjoyed the mood of a smoke-filled café. Each one of those little spirals of gray smoke curling up toward the ceiling seemed like the thread of an idea developing, filtering abroad and mingling with the murmurs of conversation, the clinking of coffee cups, the rustling of newspaper pages.

But it’s risky to admit this in the current mood; one might as well be promoting child labor or killing off the last dolphin.

Then suddenly the bright lights were switched off, the mics and notebooks folded away, thanks were exchanged and Hinterleitner rose to follow the shifting scene across the room to other dark suits, journalists and cameras.

“Finally!,” the first academic sighed, turning back to his books and sheaves of paper, and the business at hand. But it was not to be. A vivacious middle-aged woman, dark hair pulled up with a tortoise shell clip and spilling out in rebellious wisps around her face, slid into the now emptied seat on the banquette, ordered an espresso from the waiter and reached for an ashtray. She pulled a pack of Gauloises out of her bag and accepted a light from the gray-haired waiter.

“Dahnkeh sschoehn,” she said with a heavy French accent and a brilliant smile. If it weren’t so unlikely, you might have thought she was flirting. But then, maybe she was always flirting. She turned her smile on her neighbors.

“Zhe manifestation, she goes qvite well, do you not think so?” she asked happily, and then confided: “Zhe diplomats weel all be stinking mad over this. Zhey are all non-smokers!”

This was Christine Côte, a citizen lobbyist for the European Smokers Movement, which she described as a “world-wide” fight against legal restrictions on public smoking. A longtime resident of Vienna, she was working day and night to marshal resistance to the new EU mandate for an “unlimited smoking ban in place within two years.”

Today’s action appeared to have bought them some time, with wide support from the industry and Health Minister Andrea Kdolsky (ÖVP) and Health Speaker Sabine Oberhauser (SPÖ) still unable to agree on proposed legislation.

Madame Côte saw the struggle as a defense of civil liberties and against bad science. “The dangers of passive smoke are minimal, nothing like what they claim,” she said, citing a World Health Organization 30-year longitudinal study of couples done from 1960 to 1990. “But this is not publicized, because it goes again the political fashion.”

And the reports of success of the policy changes in Italy or the U.K., she said, were deceptive.  In Italy, people were actually smoking 1 to 2% more than before (Der Standard), and in Ireland, the new law result had already resulted in a 10% loss of jobs.

In Britain, she claimed, pubs were spraying with artificial cigarette smoke aroma, to cover up the otherwise intolerable smells of sweat and flatulence. Pick your poisons.

Over all, she sees signs of a changing mood.

“In the chic bars in New York, people are smoking again,” she said. “When this happens, people start wondering about all the so-called facts.”

Cafe Hawelka is one cafe that would be greatly affected by the anti-smoking law; with little space for a smoking section, smokers will look elsewhere. (Photo: Mariam Shalikashvili) 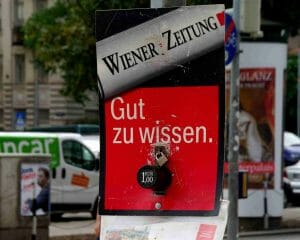