The Danube powers many an industry on its way to the Black Sea, from hydropower to high-volume logistics

Flowing through 10 countries – from the Black Forest to the Black Sea – the Danube River has unified a Central European population of some 83 million people of otherwise very different cultures and nationalities. Its waters are a direct source for over 20 million people, and feed millions more through the diverse aquatic life found among the nearly 2,000 species of plants and 100 species of fish.

But perhaps even more important is the river’s economic role as the principal waterway for the trade and transport of goods. Hundreds of commissions, initiatives, scientific surveys and business partnerships have been hatched and thrive today because of the Danube. And it has been a major factor in increasing the level of cooperation among the peoples on its shores.

The major cities on the river, including the four capitals of Vienna, Bratislava, Budapest, and Belgrade, facilitate millions of tons of freight transported by ship.

Much of what Austrians use and enjoy in their daily lives has, at some point, been transported on Europe’s mighty river, the result of trading relationships with firms and individuals in neighboring countries.

Almost 27 percent of the cargo bound for Austria last year was iron ore, used for the thousands of construction projects across the Alpine Republic. Close behind were the almost 1 million tons – 10 percent – of agricultural products such as fertilizer and farm equipment. And just over 14 percent was liquid petroleum, used predominantly to fuel cars and heat homes.

The Austrian steel company Voestalpine is one of the most important European firms that relies on the Danube. It is one of the few profitable steel firms left in Europe, a sector currently dominated by Chinese and Japanese interests, with an annual revenue of €11.3 billion and close to 50,000 employees.

Headquartered in Linz, Austria’s biggest port by commercial activity, the firm specializes in the processing of iron ore and steel for railroads, tools, cars and consumer goods. Voestalpine imports iron ore from various regions in Austria and all across Europe, turning the raw material in its factories into mixed and shaped metal for use for thousands more companies at home and abroad.

“One-third of Austria’s hydropower comes from the Danube, that’s a fifth of our electricity production.”

“Our material is vital for producing materials for construction projects not just internationally, but in Austria as well,” said company spokesman Peter Felsbach. The new streetcar lines to be installed in Vienna’s Ringstraße, for example, will use Voest-alpine’s steel rails.

Just southeast of Linz’s city center, Voestalpine occupies a pristine factory area on the shores of the Danube. Not more than 10 meters from the doors of the main factory where metal is mixed and shaped, dozens of employees dressed in yellow jumpsuits wheel pallets of finished products into shipping containers. The containers are picked up by the magnetic jaws of large mobile cranes that wheel to and fro on both sides of the artificial canal, carved inland from the river to the factory.

Having picked up its loads, the crane’s jaws shift the containers to the awaiting ships in the canal, lowering them onto marked areas and guided by fellow jump suited workers clad in yellow. The containers are then locked in place and the ship can begin its voyage downriver, its fresh steel products onboard.

“Voestalpine has relatively long and complex logistics routes for raw materials before it can deploy them,” explained commercial managing director Christian Janecek. “The Danube is a very important transport route because then we are not just dependent on the railways.”

“In recent years, we experienced strong growth at our site, and we are trying not to let truck transport take over. We wouldn’t be able to handle that – nor would the roads around us. We’re better equipped for waterborne transport,” said Janecek.

The company’s dependence on the Danube River for receiving and shipping products is thus vital to their mission.

That being said, most of the Austrian portion of the Danube is used for transiting industrial and consumer goods. Millions of tons of commodities and products are shipped for end use somewhere downstream, to build factories in Serbia or bring energy into Romania.

But while ships containing energy equipment and fuel are also found on the Danube, an even greater portion of Austria’s domestic energy is derived from the river itself. Seen as a carbon-neutral alternative to fossil fuels, hydroelectric dams are an important tool in keeping Austria committed to renewable energy.

One such dam is Altenwörth, just 20 km downstream from Krems. Opened in 1976, it produces over 2 million megawatt hours of electricity a year. Its underwater turbines run constantly and have a capacity of 328,000 kilowatts, making it one of the most productive power plants on the Danube River.

“One-fifth of Austria’s electricity comes from the Danube, and that helps us achieve our goals for renewable energy,” said Florian Seidl, spokesperson for Verbund, Austria’s largest electricity provider. “There is a big advantage to building hydroelectric dams in Austria as opposed to Hungary; we have an advantage in altitude and the river is much deeper here.”

Sixty percent of Austria’s electricity is derived from hydroelectric sources, he said, making it critical that the projects are constructed in a way that is environmentally friendly.

But dam projects are not without their critics. The International Commission for the Protection of the Danube River, based in Vienna’s 22nd district, has vigorously studied how hydroelectric dams upset tributary rivers and streams, shift fish migration patterns, and slow the currents that deposit important minerals for plants and wildlife.

So in 2011, the European Union launched a Strategy for the Danube Region to address the various environmental, infrastructural, and economic concerns of the countries in the Danubian basin that could be addressed by regulation. Its recommendations have since been adopted in member states, especially when it comes to the regulation of dam construction on the river.

The future of the Danube

Other projects are also changing the river’s role in fundamental ways. In 1992, work was completed on the Rhine–Main–Danube Canal, connecting the Danube River with Germany’s Main River, opening up the European Continent to inner waterway travel. Beginning at the narrow Kelheim Lock, ships can now continue north from the Danube through the canal. More than 30 meters deep at its lowest, it quickly shuffles ships through while filling water up to the appropriate level.

All in all, the interconnected canals and rivers allow ships to freely navigate between the North Sea port of Rotterdam and Constanta on the Black Sea, from the Netherlands to Romania, sparking new opportunities for international trade and commerce worth billions of euros a year.

The potential of the Danube has attracted interest by international investor groups. Notably, the Chinese have begun exploring avenues for connecting the Serbian portion of the Danube River with the Mediterranean Sea through Macedonia and Greece. Such a canal would cost an estimated €17 billion, and would further China’s efforts to achieve its “One Belt, One Road” infrastructure initiative, easing the export of Chinese goods through Europe and beyond. With each of these efforts, Austria is poised to benefit. The use of its ports will intensify, and more goods will flow through Austrian waters. Its regulations and energy use, seen to be both responsible and innovative, will continue to be a model for nations along the Danube.

“The Danube can lead the way towards a digital, decarbonized mobility, people and environment-friendly, increasing the efficiency and connectivity of EU transport,” Transport Commissioner Violeta Bulc told participants at a November meeting of “Danube Transport Day” of the EU.

This is an old role for Austria, chiming with the country’s the desire to serve as the crossroads to the sea. East-West, it has always been the river. Then, in the second half of the 19th century, it was the railroads, built with the new power of steam across the Alps to the port city of Trieste, which served as an inspiration for Austrian commerce.

Today, once again, Austria’s future is tied to the mighty power of the Danube. 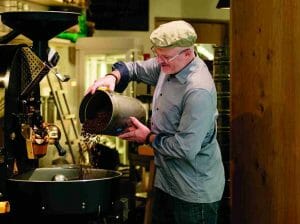