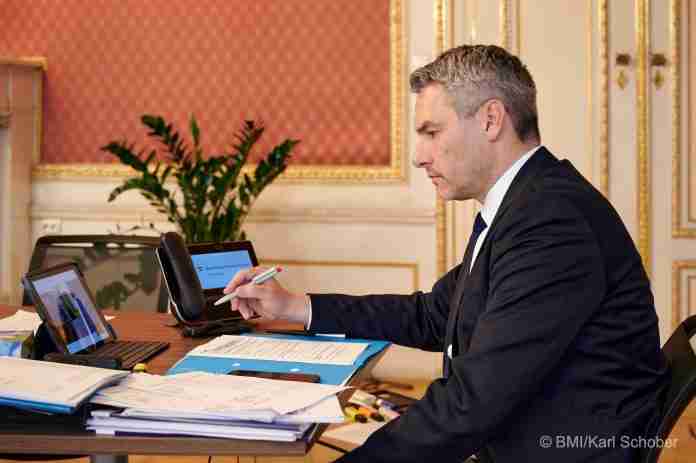 The Corona crisis granted a political ceasefire. As the emergency recedes, partisan sniping is back on the agenda, but this time, with C-19 serving as ammunition.

The Hamburg based weekly Die Zeit covers politics in its diminutive neighbor Austria with a mixture of cool Hanseatic distancing and good local reporting. “When socialist Vienna and the conservative ÖVP (governing party) collide, it is seldom polite” wrote Florian Gasser. The reference was to a lively and very public disagreement between two old frenemies, ÖVP Interior Minister Karl Nehammer and the SPÖ (social-democrat) Peter Hacker, City of Vienna’s director of public health.

Both men are battle-hardened politicians who frequently play pit bull for their respective parties.  Both look the part: Nehammer is stern and square jawed with short grizzled gray hair, who looks born to be in uniform. Hacker, with longer hair and intimidating glasses, is more like an aggressive senior academic – big voice, big presence – who rarely loses an argument.

This particular spat began in early May as the pandemic seemed finally under control: the infected rates were below a thousand and falling daily. Reports emerged of a serious Covid outbreak cluster in two post office sorting centers in and around Vienna.  Over 130 workers were diagnosed and had to be quarantined and replaced by military personnel.

Immediately, the finger-pointing began: The Vienna authorities (SPÖ) determined the source in neighboring Niederösterreich (ÖVP), but the ÖVP shot back: no, patient zero came from the socialist city.  Several of those infected were living in a residence for asylum seekers – on the Viennese side. Not that the corona bug understood this, having no respect for political borders.

Perhaps Nehammer grasped the moment to attack, while there was still mud enough to be thrown.  So what should have been a level-headed discussion over the best response became highly politicized.  ÖVP Minister Nehammer issued a warning to the SPÖ city government: 60% of all new infections are in Vienna and they should accept his offer to make use of the police for contact-tracing.

“We only want to help” he said innocently. But the implications of blame were clear. Hacker replied with well-orchestrated interviews in influential media. “I was never a mudslinger” he told Die Presse.  “At a certain point I just got fed up,” to the weekly News. But Hacker can do more than polemic. He has an impressive grasp of hard numbers and pin-pointed statistical inconsistencies across state borders, for example, the difference between deaths from C-19 and with C-19.  States’ rights, so to speak.

There is nothing new in the stand-off between Nehammer and Hacker.  Nearly two years ago in July 2018 the then ÖVP party secretary laid into Hacker for his “unrealistic” denial of parallel communities in Vienna. This dispute pin-points the ideological divide between the anti-immigrant “Fortress Austria” mentality of the conservatives and the more generous “refugees-welcome” attitude of the socialists.  Hacker is on record saying “We need immigrants.” The Corona crisis again spotlighted the divide.  While Nehammer’s police were rigorously enforcing the lockdown, Hacker favored the softer Swedish model. “You can’t just turn off a million strong city,” he said.

For readers from historically centralistic countries (France, the UK, most monarchies) American-style squabbles between the national government and the federal states are intriguing, an extra dimension of newsworthy political dissension. Austria’s entire population may fit into the five Boroughs of New York City, but we have nine semi-autonomous states, with rural regions generally more conservative and often governed by the center right ÖVP, alone or in coalition.  There are exceptions for historical reasons, but in the countryside the social-democrats tend to be almost as conservative as their rival, ÖVP Peoples’ Party.

The last real bastion of old-fashioned socialism is the city-state of Vienna, a quarter of the country’s population and dominated since 1920 almost continuously by the SPÖ. But 2020 is election year and with the ÖVP’s Wunderwuzzi (boy wonder) Chancellor Kurz riding high in the polls, the party senses a unique opportunity to score in Red Vienna.  This is almost certainly what is behind Nehammer’s gratuitous attacks. Current polls in Vienna show the ruling SPÖ leading comfortably with 38%, but well short of an absolute majority.  The conservative ÖVP has profited enormously from the implosion of the far right FPÖ (Ibizagate!), increasing their support from 9% at the last Vienna election to around 25% today.  It may not be enough to prevent a continuation of the Red-Green coalition, but it is certainly worth a shot. And these best of enemies are dueling with live ammunition.

Simon Ballam
English, studied in NY and worked in London, Düsseldorf, NY, Fankfurt, Prague and Vienna. This covered stints in market research and the film industry, international advertising coordination and strategic planning. Currently business school lecturer and journalist.
NewsVienna News
Previous articleAD | Live, Work and Play with Like-Minded People at The Student Hotel
Next articleFunding a New Future | The Race for a Vaccine