Studying in Vienna differs from the college campus image popularized by Anglo-American films. Instead of quadrangles of ivy-covered ­Gothic or Georgian brick, the University of Vienna (est. 1365), Austria’s largest and best-known academic institution, has its neo-Renaissance main building smack on the Ringstraße, with faculties and institutes spread over the entire city. It’s an urban campus; dorms are few and far between, and ­undergrad life is far more likely to play out among roommates in shared apartments, with house parties replacing frat houses.

There is one place, however, that comes close to a classic college campus – the Altes AKH (Old General Hospital), a sprawling 18th century Habsburg institution just blocks from the main building and the Uni Wien’s closest thing to a commons.

As the name implies, the Altes AKH used to be Vienna’s General Hospital; its origins go back to 1686, when a poorhouse for disabled veterans was erected here in the wake of the Second Turkish Siege. Seven years later, ­Emperor Leopold I enlarged it and opened it to civilians; finally, Josef II converted the poorhouse into a centralized hospital modeled on the Hôtel-Dieu in Paris.

When the AKH opened in 1784, it was the largest and most modern hospital in Europe. New wings were continuously added throughout the 19th century, making it the undisputed epicenter of Austrian medicine:

This is where Ignaz Semmelweis ended childbed fever in 1847 by discovering the importance of disinfection; where Theodor Billroth revolutionized surgery; and where, in 1900, Karl Landsteiner discovered blood groups, earning him a Nobel Prize and making safe transfusions possible.

By the 1890s, however, its age was beginning to show, but it would be about a century before the hospital relocated to the current AKH, which towers over the 9th district just a few blocks further north. In 1988, the complex was formally handed over to the university; a decade of refurbishments later, the first institutes moved in.

Today, the University of Vienna officially calls this its “campus,” although the name Altes AKH persists. Its 10 courtyards are home to some three dozen departments, primarily from the humanities like cultural studies, languages and history, as well as gender studies and experimental economics. Numerous remnants of the building’s medical past remain, like the Stiegl Ambulanz, an extremely popular microbrewery run by the famous Salzburg beer producer in a former outpatient clinic; its lush beer garden is almost always packed in the summer months, making it popular far beyond the campus.

Hidden away in the furthest corner of the Altes AKH you’ll find a far more macabre legacy – the infamous Narrenturm (tower of fools), the world’s very first psychiatric clinic. Opened in 1784, it was state of the art at the time: its circular halls were ­designed so patients would never get lost; windows had metal bars instead of panes to ­ensure good air circulation and the cells initially didn’t have doors – harmless ­lunatics could roam freely while only the violent were chained to the wall. Its squat, round shape resembles a Gugelhupf (an Austrian cake), which became both the ­facility’s nickname and a generic word for insane asylum in Viennese slang.

These days, it houses the Museum of Natural History’s pathological-­anatomical collection, which boasts over 200 years of morbid medical curios, from the skeletal remains of Siamese twins to 19th century medical equipment and ­ancient moulages – wax or plaster casts of clinical conditions made for training purposes.

The area around the campus is predictably attuned to student life. Over on Spitalgasse, coffeehouses and eateries cater to the student crowd: Aside from the ever-popular Coffeepirates, which is seemingly always packed with undergrad study groups, there’s the Home Café, Vienna’s only Icelandic eatery; beloved for its cozy atmosphere and the two greyhounds roaming the premises, it specializes in healthy cuisine with strong Scandinavian undertones, sourcing its fish directly from Iceland. A few houses further is Tea Stories, a charming little tea room decked out in plenty of natural wood that serves various Vietnamese treats – and great tea, of course. 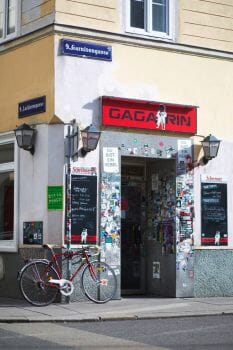 Around the back on Garnisongasse you’ll find Café Gagarin, a quintessential student dive; if the logo and the leftist stickers over the entrance weren’t a dead giveaway, their very reasonable beverage prices and vegetarian/vegan fare served under pay-as-you-wish rules should be strong indicators that it caters to resident radical elements. Somewhat ironically, this hotbed of revolutionary fervor is located directly across from a building belonging to the national mint. Just a little further down the road is the showroom and “roasting lab” of CaffèCouture, an award-winning coffee bar run by two-time Austrian Barista Champion Georg Branny; its clean, white interior belies the magic it serves, making it the choice of the true coffee aficionado.

Naturally, the old general hospital isn’t the only historic building in the area. Down by the next street corner is Schwarzspanierstraße and the Albert-Schweitzer-Haus, a student dorm run by the Austrian Lutheran Church that stands on the ruins of the old Schwarzspanierkirche (lit. Black Spaniard Church) that gave the street its name. The titular “black Spaniards” were, in fact, the Benedictines of Montserrat, who first built a cloister here in 1690; it eventually became a Lutheran garrison church before aerial bombing destroyed it in 1944. And while today’s dorm was built in the 1960s, the church’s 18th century façade remains to this day, making it one of the oddest buildings in Vienna. 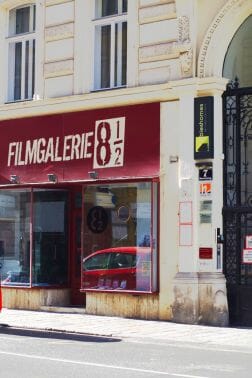 Just a little further up is another relic from an earlier time: 8 ½. Named after Federico Fellini’s celebrated film about filmmaking, this is one of Vienna’s few remaining video rental shops. Preferring the term “film gallery,” they manage to stay in business by specializing in hard-to-find – let alone stream or download – cinematic treasures from all over the world, and their movie library is second only to the Austrian Film Museum and Filmarchiv Austria.­Becoming a member is practically a rite of passage for the city’s cinephiles, marking you as a serious movie nut. A few doors down is the Highlander, an unpretentious Scottish pub that brews its own beer and regularly hosts tastings by the local Scotch Malt Whisky Society. Traditional without being cloying, its proximity to the university and regular pub quizzes and live music sessions make it a neighborhood favorite.

Finally, one last institution awaits: adjacent to the Altes AKH, you’ll find the Headquarters of the Austrian National Bank and its Geldmuseum (museum of money), which offers a thoughtful overview of legal tender throughout the ages. It’s not all coins and banknotes though; its permanent exhibit also explores the relativity of value, showing how salt or other commodities were used as currency at various times and even allowing visitors to lift a solid gold bar upon admittance, demonstrating the physical heft of worth, which is all too often seen as an abstraction.

With so many pleasant distractions around the Altes AKH, some may wonder how any work gets done at the university – and granted, a secluded, leafy campus would certainly be more conductive to academic excellence. But student life enriches the entire area, extending its vibrancy far into the 8th and 9th districts. Don’t forget that good grades aren’t the sole pursuit of scholars, and an Ivory Grätzl is far more fun than a tower. 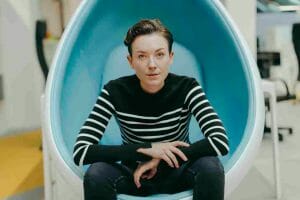