Named after a sixth century Bavarian noble called Focko or Fuko, the people of Fucking are used to mockery. Viral videos have brought selfie-taking British tourists, traffic sign-stealing teens and even a beer brand named Fucking Hell, which cashes in on people’s love of juvenile puns (and helles beer).

Now, Fucking has unwillingly joined a long list of places notable for their sexually suggestive names, ranging from Analandia, Brazil to Weener in Germany. While these are some of the more innocent-sounding places designated as “Premium Places”, it is explicit-sounding places like Fucking which are sure to receive the most attention from the website’s publicity stunt.

In old Germanic, “Fucking” means the “place of Fokko’s people.”

WHAT OTHERS HAVE SAID:

“Friends have told me that Fucking is fabulous. Are you familiar with Fucking?” – Graham Norton, British TV host 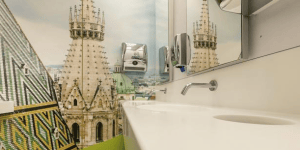