The Stuwerviertel is an anomaly, both more and less than meets the eye: Wedged in between the Prater, Mexikoplatz and Ausstellungsstrasse, it’s quiet, unimposing, with wide alleys lush with trees and venerable Altbau apartment houses that suggest a comfortable, residential neighborhood where you might find the occasional café, tavern or antique store.

But despite its fine housing stock and central location, it has long lived in dusty decline, with empty storefronts and an aging population whose world has moved on.

While other parts of the 2nd district have taken off, gentrification is crawling in at an almost imperceptible pace here. Even with the shiny new WU (Vienna University of Economics and Business) campus next door, there are few areas that the Bobos have yet made their own. Only the Vorgartenmarkt, tucked in among the back streets near the Vorgartenstrasse U-Bahn station, shows early signs of urban renaissance.

The explanation is not hard to find – Stuwerviertel is still trying to shake off a questionable reputation. As recently as six years ago, the area was a notorious red light district considered off-limits to visitors, rife with streetwalkers catering to Johns from the nearby Prater.

Starting with a Bang

The Stuwerviertel’s beginnings reach back to the early days of the Prater itself, when it was opened to the public in 1776 by Emperor Joseph II. The Grätzl’s name is a homage to the local pyrotechnician and early aviator Johann Georg Stuwer, whose elaborate firework displays in the 1770s were quite the hit among the Viennese, establishing a family trade that lasted a century.

Yet it was also this enviable proximity to Europe’s largest amusement park and recreation area that first attracted the infamous streetwalkers and their dubious clientele.

Now, however, with the arrival of the WU and some coordinated neighborhood renewal efforts – supported by the outlawing of street prostitution in 2011 – Stuwerviertel is turning over a new leaf. Students and young families are moving in, attracted to the roomy, inexpensive apartments along leafy streets, in easy walking distance of the park. Here and there, a few “studios” and “clubs” are still sprinkled along backstreets, as a reminder of the not so distant past.

Nevertheless, the Stuwerviertel has preserved a special charm – an eclectic mix of handsome architecture and traditional Gasthäuser, Beisln and abandoned shops that seem in no hurry to change. And those that have set up shop here have only made the place more interesting. People like the Messerkönig, the self-proclaimed “knife kings,” who not only sharpen your dull edges but also manufacture their own blades and offer courses on how it’s done. Just across the street is the Vorgartenmarkt, a cozy open-air market that is beginning to accommodate its newer clientele with organic food stores, fine wine and beer purveyors and an artisanal bakery.

The newest addition, Mochi Ramen Bar, serves Japan’s favorite noodle soup in a flash, alongside fresh gyoza dumplings. Further south, the circular Ilgplatz anchors several neighborhood fixtures like the Circus and Clown Museum, announced in carnival colors at No. 7. An institution since the late 1920s, it delves into the history of performing arts, the traditions of public revelry and Viennese cabaret. Just across is the Neat Corner Shop – a fresh concept store selling accessories made by young Austrian and international designers.

Change at a Slow Pace

Not far away, Le Cèdre, long a favorite in diplomatic circles, offers Lebanese specialties to passersby from the WU and Messe Wien convention center, and it is a quiet place to enjoy a shisha with friends. Further toward Praterstern, fishermen can find all they need at Anglertreff, a one-stop shop for lures, hooks, bait and everything else needed to catch the big one.

For old-fashioned Viennese cuisine and flair, Gasthaus Möslinger has welcomed guests since the 1940s; the Taudes family took over in 1989, adding a hint of Waldviertler heritage to their Viennese classics, all proudly sourced in Austria. Far more exotic, Vienna’s only Dominican restaurant Santo impresses with its selection of rums and Caribbean specialties like pica pollo and carne de rez. If you’re still around by nightfall, you might want to stop by Dezentral – a café with live music in the evenings.

It may be years before true change takes place, before all the deserted businesses in Stuwerviertel are alive with activity. But the direction is set: Apartments are under construction and new residents are moving in. And in the meantime, we get to enjoy a unique mixture – a neighborhood of scruffy charm, set in its ways yet wanting to change – creating something new and unpredictable in the process. 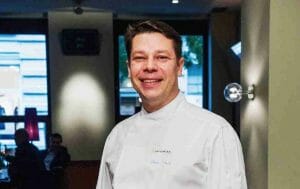 Be My Guest: Chef Denis König