Austrian writer Josef Haslinger is something of an exception in the literary world – a novelist of depth who writes page-turners, a social critic in deceptively simple language, reminiscent of Stefan Zweig, a master of tension but also of grace. So it feels, if anything, all the more frightening when suddenly this strong voice becomes the one wronged – telling us more than we ever imagined, or wanted to believe.

Haslinger is best known for his 1995 novel Opernball (“Opera Ball”), an imagined terrorist attack by a group neo-Nazis sympathizers, observed on screen by a television journalist covering the event, in which thousands of Ball goers, including his own son, lose their lives. Now, in his new book “Mein Fall” (My Case), the 65 year old writer tells a very different story, also horrific and deeply disturbing. Relating his own experience, Haslinger reports on the sexual abuses at the Monastery and explains why he waited until after the accused had passed away.

“I didn’t want to ruin their retirement”

“I don’t want these people paraded in the stocks,” Haslinger writes in his book. Furthermore, he told the weekly Niederösterreichische Nachrichten NÖN (Lower Austrian News). “That’s why I waited until everyone had died. I didn’t want to ruin their retirement, even though they ruined my childhood.”

This was not the first time Haslinger had talked about his experiences. In 1983, he published a short story called “Die plötzlichen Geschenke des Himmels” (The Sudden Gifts of Heaven) in which he described in detail what was done to him, but did not mention the name of the abuser.

“He laid his bulging piece of meat on my tongue like a consecrated host, smiled at me, said, ‘Go ahead, I dare you. A stale, meaningless taste, a little disgust. Then it suddenly bumped into my mouth, twitched back and forth, I couldn’t escape it anymore. My head was pressed against the tuft of hair from behind, it stretched me when the religion teacher hit my palate, wanted to slip down my esophagus …

It was only in November 2018 that Haslinger finally turned to the Unabhängige Opferschutzkommission (Independent Victim Protection Commission, also known as the Klasnic Commission) set up the Catholic Church itself. He had told his story three times when a clerk asked him to write it down. “After all,”, the man allegedly said, “you are a writer and better with words.”

“I think it will be useful for other abuse victims as well,” Haslinger said in his interview with NÖN, ”I give everyone the same advice: Don’t keep it to yourself any longer, talk about it. I cannot do this for you. You have to do it yourself. And if you are not past the statute of limitations, go see the prosecuter.” 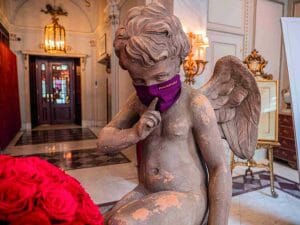