Designers Elena Čović and Bjanka Mujičić, creators of RahatLook, take their brand name very seriously – they want their customers feel rahat, comfortable or at ease, or what the Austrians call gemütlich.

The story of RahatLook began in 2013 when Elena Čović, a former geography teacher in Bosnia and Herzegovina, was faced with the harsh reality of unemployment in the education sector. Elena had two options: Either to stay a teacher in fear of losing her job at any moment or create her own business and finally feel rahat, at ease, a state of mind that she had been desperately craving.

So she chose the second, starting a business in a field that she was equally interested in – fashion. As soon as the idea for a vintage store was born, she created a Facebook page and
consequently laid the cornerstone for what would become a second-hand label on an international scale.

“In a country where little rahatluk was left, I was searching for my own kind,” said Čović looking over at her business partner Bjanka Mujičić. Mujičić was born in Croatia and raised in Chicago, although her family originally comes from Bosnia and Herzegovina. Six years ago she moved to Vienna to work for a trading company. She and Elena met over social media and instantly connected, and Bjanka became part of the executive team of RahatLook.

The Bosnian term rahatluk derives from Arabic and can be translated as “comfort,” “ease,” “solace” – a state of mind, which Elena Čović and Bjanka Mujičić wanted in their work life. The second part of the name refers in part to the essence of their brand – fashion – and on the other to their logo, which is an onion, Bosnian for a vegetable with layers.

By choosing a Bosnian brand name, the two wanted to build a bridge to their country of origin and reinvent the image of today’s Bosnia and Herzegovina in the wider world.

Much of what makes RahatLook the brand it is today is the growing interest in slow fashion and sustainability. In the early 2010s, online second-hand sales were still a market niche in Bosnia and Herzegovina and with the environment in mind, RahatLook was not only meant to be a fashion brand, but also a statement against fast fashion.

Buying Vintage in the Age of Technology

Inspired by the fashion sense and style of their parents in former Yugoslavia, Elena Čović and Bjanka Mujičić, are trying through RahatLook to revive the ’70s, ’80s and ’90s – handpicking and collecting clothing at flea markets all over Bosnia and in Vienna. Every garment is curated, cleaned and tells a story of its life cycle. So when you purchase from RahatLook, you are also gaining insight into the past. Not only is the origin of the clothes retold, but fashion trends are explained and visualized in their newsletter and on their infamous Instagram page

As of now RahatLook is mostly online, but in recent years, the two entrepreneurs have organised pop-up store showrooms and their own flea markets, where they exhibit the works of local artists and invite DJs to play.

While the future for RahatLook is written in the stars, one thing is for sure: Elena Čović and Bjanka Mujičić’s Rahatlook is Bosnia born, but bred and broadcast from Vienna.

What Lies Ahead for Café-Restaurant Cobenzl 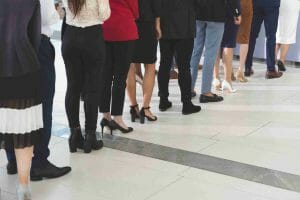