Tall windows usher in soft morning light that floats into the quiet grandeur of the Hofburg palace, the permanent home of the Organization for Security and Cooperation in Europe (OSCE). It is here, in the vast Ratsaal in late November, that a panel of international experts presented the organization’s new study “Following the Money: Financial Investigations into Trafficking of Human Beings (THB).” A wall of colorful state flags serves as the backdrop while Hungarian Timea Nagy Payne, a human trafficking survivor, author, speaker, and social advocate, tells her story.

Growing up in extreme poverty, Payne, then 20, responded to an au-pair ad that offered her an opportunity to emigrate from Budapest to Canada. Shortly after arriving in Toronto her nightmare unfolded, as she was forced by her traffickers to work in Ontario’s sex industry for three months. “I slept three hours and worked 21 hours a day,” Payne shared. “I made $1,500 a day which all went to my traffickers.”

Trafficking generates $150 billion each year from the exploitation of people in need. Payne alone made her handlers $40,000 “in my blood, sweat and tears,” she told the gathering. In 2016 alone, there were a reported 40.3 million victims of trafficking worldwide, with 4.8 million forced into sexual slavery. Payne was one of them. 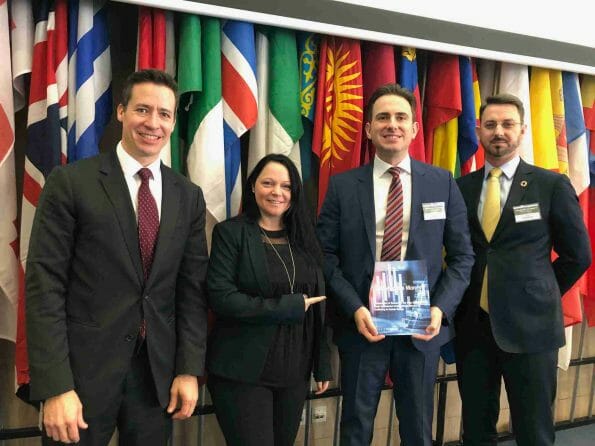 Human trafficking is such a diffuse industry, governments and NGOs are often at a loss as to how to effectively intervene. One possibility, Payne suggested, is to create a financial dead end:  “to teach financial institutions not to take money from traffickers.” Now commissioner of a new Financial Sector Commission on Modern Slavery and Human Trafficking, a part of the Liechtenstein Initiative, she is the first survivor of human trafficking to work with banks and financial institutions to develop intervention strategies.

The need is dire: human trafficking is now the fastest growing form of organized crime world wide and ranks as the 3rd largest source of illicit profit after narcotics and arms trafficking. Still, financial investigations have been not been coordinated across the OSCE’s 57 participating states.

“Human trafficking is a tremendously profitable crime – it is time that we hit traffickers where it hurts by investigating and seizing their cash flows,” said Valiant Richey, OSCE Special Representative for Combating Trafficking in Human Beings. While good work has been done in financial investigations, he said, many of these efforts have been isolated and fragmented.

In light of this, the OSCE Special Representative and Coordinator for Combating Trafficking in Human Beings (OSR/CTHB) along with the Secretariat to the Liechtenstein Initiative developed “Following the Money,” a guide to establishing a framework for successful financial investigations and assist stakeholders in financial institutions, financial intelligence units (FIUs) and law enforcement.

The framework is designed to be applied across the OSCE region, providing for wide variation in the cases of THB. While many may share similarities, THB operations do not follow a single business model, varying with supply and demand as well as historical and cultural influences that shape the business practice. Additionally, there are regional differences in money laundering methods. Traffickers in Europe tend toward cash intensive businesses, like real-estate and luxury goods. In North America, cash tends to circulate in casinos, through wire transfers and import/export companies. In Asia and Africa, traffickers commonly rely on informal banking systems, such as hawala, a form of transfer heavily dependent on trust where no currency actually changes hands and no promissory notes are written, making tracking almost impossible.

In the developed world, financial institutions are required to implement Anti-Money Laundering and Terrorist Financing (AML/CFT) measures such as verifying the identity of customers, maintaining detailed records of transactions and identifying and reporting suspicious activity.

Because of its location at the center of Europe, Austria is affected by human trafficking both as a transit and destination country. From 2014 to 2016 there were 353 reported cases of trafficking in Austria according to the 2018 UNODC Global Trafficking Report. Of those, only 69 convictions ensued. The majority of the victims were Austrian, followed by Bulgarians, Romanians and Hungarians. However, there are far more cases in neighboring Hungary, where there were 1,733 trafficking cases during the same period (the vast majority of victims Hungarian)  – but only 36 traffickers convicted.

The rate of human trafficking convictions worldwide remains low with only 7,705 THB prosecutions and 4,746 convictions in 2012. In over 60 countries there were no convictions at all. As a result, THB remains a low risk, high profit criminal industry. Sex workers in the Red Light District of Amsterdam can make their traffickers up to €8,000 a month, while children forced to beg and pickpocket in any major European city can generate over €300 a day (€9,000 a month).

To intensify anti-trafficking measures in Austria, a Task Force on Combating Human Trafficking was established within the Foreign Ministry in 2004, shaping National Action Plans and monitoring their implementation. The three such plans adopted to date (in 2007, 2009 and 2012) include measures for coordinated prevention, protection of victims, prosecution, and international cooperation.

Cooperation is key, say experts, for detecting and dismantling THB operations and their cash flows through financial institutions. If the cash can’t move, human trafficking can be stalled. 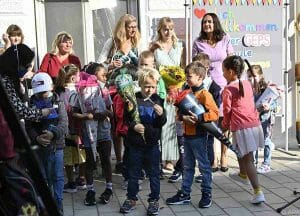