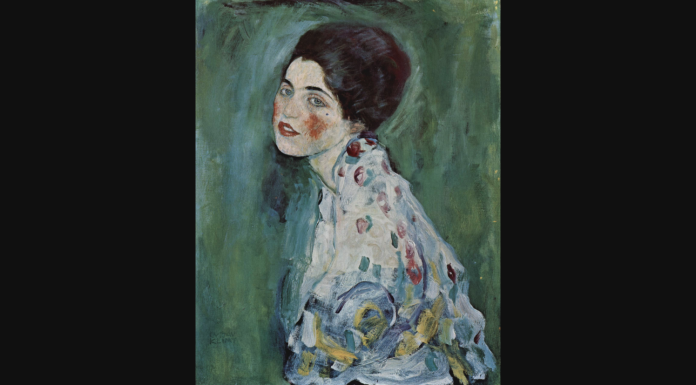 The famed Austrian painter’s recently recovered “Portrait of a Woman” is confirmed as the one stolen from an Italian museum over two decades ago.

It was a scene worthy of Hollywood: Two gardeners pruning back the ivy on the old walls of the Ricci Oddi Gallery of Art in Piacenza, Italy, came upon a weathered metal door concealing a cupboard in the stone: Inside, in a black garbage bag, they found the Portrait of a Woman, painted in 1912 by Austrian artist Gustav Klimt, stolen from the museum in 1997, while preparations were underway for a special exhibition in its honor.

The painting’s dramatic disappearance nearly a quarter century ago had been one of the art world’s most famous unsolved heists, and its recovery the cause of widespread relief. When its authenticity was confirmed January 17, reactions could only be described as euphoric.

“It’s a great, great moment for the city, and for the art community,” city councilor Jonathan Papamarenghi told London journalist Alex Marshall, describing the painstaking authentication process that included the use of X-rays to reveal a second portrait known to be underneath. The police then moved the painting to a storage vault at a nearby bank.

The same day, two men confessed to stealing the painting, assessed at least €60 million, and to returning it three years ago, as “a gift to the city.” By 2017, the statute of limitations on the crime had also lapsed, and the thieves could no longer be prosecuted.

Gustav Klimt is a phenomenon in Austria, today, easily the country’s most famous painter, whose “Portrait of Adele Bloch Bauer”, known as “The Lady in Gold,” sold for $137 million at Christie’s in London in 2005, at the time the highest price ever paid for a work of art.

Born in 1862, Klimt was a craftsman-turned-painter, the son of a goldsmith, who transformed the art world of his time. In his hands, ornament became art and symbols, poetry. He painted decorative murals in the Kunsthistorisches Museum and the Burgtheater, and was later commissioned for the huge allegorical ceiling paintings to honor the faculties of Medicine, Law and Philosophy for the Great Hall of the University of Vienna – setting off one of the strangest and most impassioned battle of ideas in the history of art. Klimt’s allegories showed disturbing images of pain, illness and decline, poverty and ugliness. The university insisted they be removed; in Paris, Philosophy was awarded a gold medal at the 1900 World’s Fair.

Klimt remained controversial: Frustrated with the stifling traditionalism of Vienna’s Künstlerhaus, he led a group of like-minded artists to form the Wiener Secession, which was to transform Austrian culture and launch the modernist movement across Europe.

So when a lost Klimt is found again, undamaged, it’s big news everywhere – but most of all in Vienna where he is, more than anywhere, part of the city.

Dardis McNamee
Dardis McNamee is the Editor in Chief of Metropole. She has written for The New York Times, Conde Nast Traveler (NYC), the Wall Street Journal Europe and Die Zeit in Vienna, as well as having been a speechwriter to two U.S. ambassadors to Austria. She was awarded the 2007 Kemper Award for Excellence in Teaching (Media & Communications).
NewsVienna News
Previous articleSPÖ, NEOs Sue to Reinstate Ibiza Inquiry
Next article16 Viennese Idioms That Make No Sense Whatsoever