In retrospect, the past seems inevitable. But even in late 1947, a discouraged US Secretary of State George C. Marshall gave his European Recovery Program no more than a 50/50 chance of passing Congress. How it came to be, and to alter the future of the West, is the story of The Marshall Plan – since 1947, a powerful retelling by Austrian historians Günter Bischof and Hans Petschar of the crisis and rebuilding of Austria and western Europe after World War II.

Launched on April 3, 1948, Marshall’s European Recovery Program (ERP) – called “the most enlightened self-interest in history” –provided financial and technical aid over four years, while requiring economic cooperation and the reduction of trade barriers that laid the foundations for the European Union.

In a narrative both highly readable and exhaustively sourced, Bischof recreates the postwar trauma and uncertainty in occupied Austria, as the US, Britain and France maneuvered to compensate for the Soviet stripping of “German assets” – some $500 million in industrial equipment, 300 companies, 160,000 hectares of arable land, the oil industry and the valuable Danube Shipping Line (DDSG). Granaries were emptied and supplies looted; the Viennese were surviving on 350 calories a day, the lowest in Europe.

Marshall returned from Moscow in April of 1947 with nothing in hand. “The patient is sinking while the doctors deliberate,” he warned. On June 5, addressing the Harvard commencement, he outlined a “cooperative program” to help Europe get back on its feet.

“Our policy is directed not against any country or doctrine but against hunger, poverty, desperation and chaos,” he said. “Its purpose should be the revival of a working economy in the world so as to permit the emergence of political and social conditions in which free institutions can exist.”

But Marshall was not an electrifying speaker; his mild delivery brought only polite applause and struck columnist Joseph Alsop as so vague, he left without realizing what he had heard. Fortunately, aides raced copies to the press and British Foreign Secretary Ernest Bevin was galvanized to action. Ten months later, the plan complete, supporting legislation passed in Congress, and $13 billion – some $135 billion today – began to flow into Europe.

It’s a compelling tale, richly illustrated with photographs and narrative captions, curated by Petschar, director of the picture archive at the Austrian National Library. Selected from 20,000 images gifted by the United States Information Service in 1977, they tell a powerful story, sweeping in scale, often astonishing in their intimacy.

That Austria ended up in “the West” may today seem foreordained. Not so at the time. Czechoslovakia, Hungary and Poland had all hoped to join the ERP – until the Soviets clamped down, accusing the US of using the Marshall Plan “to divide Europe into two hostile camps.” While this was not entirely wrong – the US was certainly trying to preserve liberal democracies – it was the Soviets, not the Americans, who “infringed on the sovereignty” of these would-be participants.

“It may be one of the great ironies of history,“ writes Bischof, that this 70th anniversary of the Marshall Plan coincides with a US president “who has called institutions like NATO ‘obsolete’ and is indifferent to the European Union….”

Indeed. Any American reading and reliving this history will find it hard to deny an enormous pride that the United States was once able to envision – and carry through – a program like the Marshall Plan. Perhaps what was possible once may one day be possible again, and the United States may regain its vision of itself as a force for good. 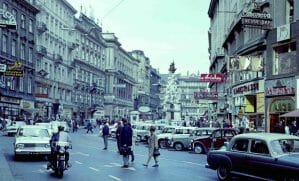