Aneta Bulant-Kamenova came to Vienna for the first time in the summer of 1969 little knowing how visit would shape her life. This is the year of a major international competition for the design of the new United Nations in Vienna – “a very important event not only politically, as Vienna was the buffer zone between the West and the East,” Bulant-Kamenova remembered, but also because of the many notable architects who took part. Together with a colleague, she decided to submit a project and applied for a visa to come to Vienna to see the site.

Getting out of Bulgaria was difficult at that time but with the support from the architects association in Sofia, her application was finally approved – ironically only shortly before the project had to be submitted without some essential technical details a site-visit would have revealed (and in fact, their plan was quite similar to the Viennese UN building today).

This first visit gave her the chance to meet Anna-Lülja Simidoff Praun, a leading architect of Bulgarian-Russian descent and a family friend. Praun had been the first woman to study architecture in Graz, and was now a renowned architect and interior designer, part of the intellectual circles in Vienna, and a pioneer of postwar Austrian design.

“Her environment was at such a high level that you wanted to be part of it,” Bulant-Kamenova remembered in a recent interview. Her influence on the young architect was enormous. The two developed a strong friendship, and Praun became her mentor, introducing her to the vivid art world in Vienna, full of aristocrats, architects, and artists for and with whom she would do projects later on.

“People move abroad and emigrate for economic, political reasons…My biggest attraction,” Bulant-Kamenova said, “was the cultural exchange and the people I could be in contact with.” She became swept up in the scene, and handed herself over to this new life.

Today, Bulant-Kamenova is an internationally recognized, award-winning architect who made Vienna her home of choice in 1981. Born in Sofia in 1942, she grew up as the only child in an intellectual family, where her father was a literary historian and her mother an astrophysicist, who discovered several new stars and gave her daughter a lifelong fascination with the heavens. But her family roots show deeper ties between Bulgaria and Austria, with an Austrian grandmother of the Wisoko-Meytsky family, whose sister married Hans Lauda, the grandfather of the Austrian F1 Legend, Niki Lauda.

Still fascinated by the stars, she applied and was accepted to study nuclear physics and also architecture. She chose architecture because of her close contact with a school friend whose father was an Architect. She explains that she “admired his drawings” and the stories from his student years in Italy.

The World “In Between”

Soon after arriving in Vienna, she became excited by the differences in design that both reflected, but also defined, how people lived. “The traditional houses in Austria and Western Europe, in general, are closed, perhaps because of the climate,” she explained. “So you open a door and you’re out in the field.”

In the old Bulgarian houses, the transitions were more gradual. “You have closed rooms, then a veranda, where one part has a lattice, half-closed to be seen from the inside, but not from the outside,” she said. “Then an open part of the veranda, an external staircase and then the high walls of the yard.” In Bulgaria, there were lots of stages “in between,” and living took place in all of them.

So she began putting this idea to work in a modern idiom: Elements from nature, landscapes and rural architecture are woven into Bulant-Kamenova revolutionary and elegant glass constructions.

One striking example of this are the winter gardens of the family Sailer and Denzel, sophisticated silicone-bonded glass buildings that make a smooth transition from the inner to the outer space of the house to create an outdoor room.

Once in Vienna, the talent of Bulant-Kamenova didn’t stay hidden for long. Soon after, she got an offer from professor Johannes Spalt to assist him in the creation of an archive of Bulgaria

“Through the eyes of the foreign architects, I got an idea about the value of the Bulgarian national Architecture,” she told Metropole. From there, she went on to collaborate with big name architects like Anton Schweighofer, Otto Steidle, Friedrich Kurrent, and others. After finishing her Dissertation, she began teaching at renowned universities as TU Vienna, TU Innsbruck and TU Berlin. She was also a visiting professor at the University of Monterrey in Mexico with Klaus Wailzer.

Bulant-Kamenova is also a co-curator of several exhibitions on Bulgarian architecture in Vienna. The last one, with Adolph Stiller at the Ringturm Gallery in 2019, presented Bulgarian architect Stefka Georgieva, a leading figure of Bulgarian Brutalist Architecture of the post-war years and yet today, nearly forgotten.

It was an important exhibition, hailed by critic Aneta Vasileva as “a chance to return and rediscover a forgotten, and for many today a totally unknown part of the history of Bulgarian architecture.” In this sense, Bulant-Kamenova in Vienna has been able to build important bridges between Bulgaria and Austria.

Here, she also met Klaus Wailzer, with whom she founded Bulant-Wailzer Architecture Studio in 1996. Their joint work brought them international awards and a name for innovative and elegant glass structures. Their aim was an architecture extremely reduced, without decorative effects, that performs its protective functions without weighing down those who live or work within them. These constructions are intended to fit harmoniously into a diverse environment and at the same time give opportunities for interactive communication with the ever-changing outdoor space.

Among best-known works is the Lugner City Suspended Glass Bridge, which floats over the Gürtel. Escalators lead the pedestrian coming out from the subway station through the glass construction into the restaurant lounge. The steel structure is wrapped everywhere with frameless glazing of insulating glass panels. This is the world‘s first suspension glass bridge, without any columns, hung on two steel ropes to the building of the cinema center.

A second project known to almost every Viennese is the Skywalk pedestrian and cycling bridge. Leading from the U-Bahn station Spittelau, the bridge guides the people over the complicated junction of streets to the surrounding sidewalks. The project is a light air path that opens a panoramic view of the sky and the surrounding area and at the same time fits harmoniously into the diverse environment.

Aneta Bulant-Kamenova’s career has been shaped by her natural sense of space and construction developed growing up in Bulgaria. She sees herself as a cosmopolitan, with inspiration for her works in the architectural heritage of a wider world.

“State does not matter,” she says, “Culture matters, and the character of the person.” 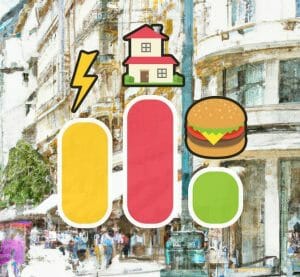