The Wiener Linien is out to sell the advantages of public transport over cars, both in a billboard campaign and new videos designed to go viral. Austrian pop group Minisex is covering one of its own songs from 1982, the radio hit Wir fahren mit dem Auto (Austria’s equivalent to Madness’s Driving in My Car). In the new version… well, see for  yourself.

Social media is also abuzz with the news that some Vienna’s U-Bahn cars are now scented; those wishing a sniff should seek out the four florally decorated trains, two each on the U1 and U6. Each features a different scent, as the Wiener Linien asks passengers to vote on their favorite. Fifty years ago, the vision of such dizzying heights might have stopped its founders in their subterranean tracks.

On the morning of November 3, 1969, the dirt started to pile up on Karlsplatz. Right across from the storied Karlskirche, celebrating 230 years, the construction of Vienna’s U-Bahn was just beginning. It was about time. The first serious plans to build an underground train network in Vienna dated back to the 1840s; some said Vienna had the most subway blueprints of any city in the world.

Yet other projects such as tram lines to the suburbs and the Stadtbahn under the leadership of Otto Wagner – later turned into the U6 and the U4 – took precedencewhile bequeathing the city its graceful Art Nouveau pavilions on Karlsplatz and along the Gürtel. When World War I turned the Imperial city into the oversized capital of a small Alpine republic – what people called Wasserkopf Wien (Vienna, the bloated head) – plans for a subway network were all but abandoned.

The 1920s saw fantastic new U-Bahn schemes dreamed up by the leaders of socialist Red Vienna, but these again took a backseat to the urgent task of building enough social housing for the overcrowded working class and constructing and electrifying the city’s extensive tramway network.  Plans were quashed again by the stock market crash of 1929 and after being revived briefly during World War II, they were again tabled by the Nazi-mandated expansion that made Vienna the world’s sixth-largest city,

Amid the demands of post-war reconstruction. U-Bahn plans were again put on hold by the four Allied occupying powers as the Iron Curtain fell just 50km west of Vienna. Old blueprints, which envisioned subway networks serving a metropolis of three to four million people, became ever less likely. Some tram lines were replaced with more flexible buses as the subway was set politically against the need for more social housing.

As the economy recovered and began to grow again in the 50s and 60s, so did Austrian’s love affair with the automobile. Squares like Stephansplatz were turned into roundabouts, and the city fathers even considered having a highway lead directly to Karlsplatz.  Thankfully, public transport was still seen as vital. As the streets became clogged with cars – and the city could finally afford it – work on the U-Bahn finally began.

On January 26, 1968, the Vienna City Council chose one of the 25 proposed plans calling for an initial network of 30 kilometers – the U1 from Reumannplatz and Praterstern, the U2 between Karlsplatz and Schottenring, and the U4 from Hütteldorf to Heiligenstadt. While the U1 was built completely from scratch, large parts of the U2 were a repurposing of an existing tramway line, and the U4 transformed the Stadtbahn into a subway.  Employers would finance the project by a designated U-Bahn tax, still levied today.

It was at Karlsplatz, that all three lines would meet, and media swarmed to witness entire train units lowered down to the tracks.  There, on May 8, 1976, seven years after construction began, the first passenger train of the Wiener U4 U-Bahn line left Heiligenstadt for Friedensbrücke.

Since then, Vienna’s U-Bahn network has expanded massively, today serving over 450 million passengers each year along 79 kilometers of track. After the extention of the U2 out to Seestadt, new lines – an extended U1, U2 and an all-new and automatic U5 (born long after the U6, to the bewilderment of tourists) – means more construction and more passengers for years to come.

Holders of annual passes for the Wiener Linien have more than doubled since 2012, when the price was fixed at €365 for the entire network of trains, trams and buses. Today, more Viennese own a Jahreskarte than own a car (for more about all that, see graphic). 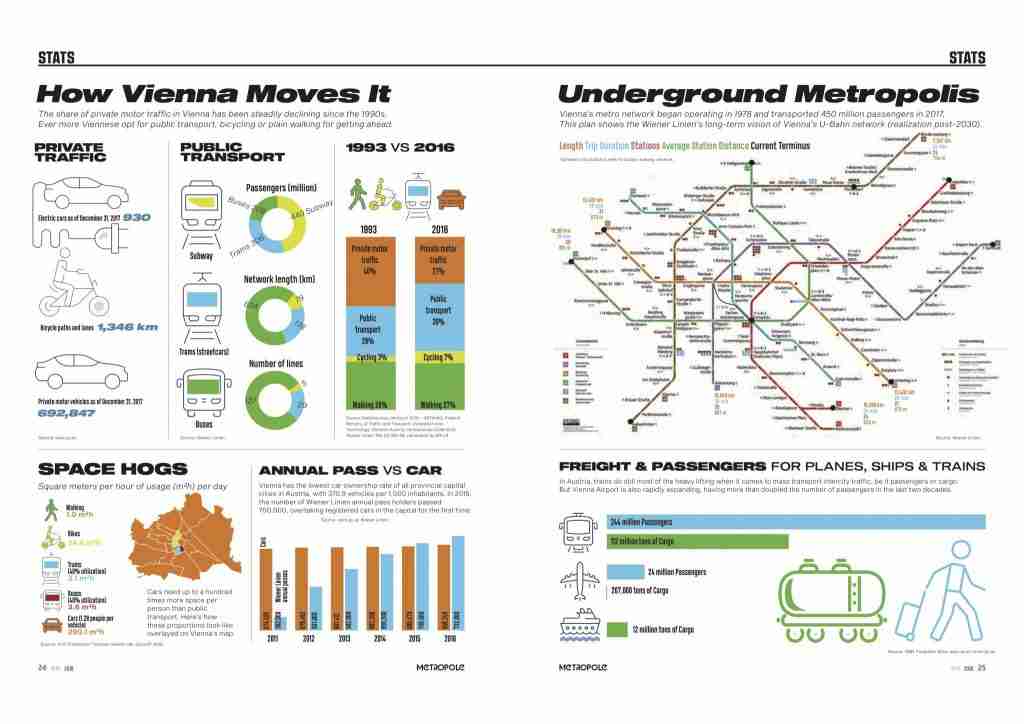 So, when parts of the U4 close down in July and August for renovation between Karslplatz and Längenfeldgasse – spare a thought for the persistence of planners, for the builders and drivers of Vienna’s subway network. And remember: Gut Ding braucht Weile (A good thing takes time!).