Baffling and bewildering, illusionist Philipp Oberlohr knows everything about you

As I walked through the 16th district, I suddenly got a queasy feeling. I was on my way to The Game, a performance by illusionist Philipp Oberlohr, but, inexplicably, something felt off. I walked up a narrow staircase to the first floor of an ominous abandoned warehouse, and reached an illuminated hall furnished with nothing but chairs, a makeshift bar and an odd collection of cloth strips at the center of the room. As I was welcomed by a man of medium height wearing a suit and sporting a knowing smile, it finally hit me: I was expected.

This is, of course, exactly what Oberlohr, an Austrian expat who recently returned after years in the U.K., wants you to feel. After flabbergasting Londoners for the last three years with his mental skills – or clever tricks, as some may have it – he recently moved to Vienna and is now performing here in both English and in German. His pay-what-you-can show The Game (€10–€20) is appropriately named; inspired by the eponymous 1997 David Fincher thriller about an investment banker sucked into a strange and unsettling interactive play, it’s a tantalizing but breakneck ride, heavy with audience participation.

Confident and congenial, Oberlohr quickly cast a spell on his audience. “You all,” he told us conspiratorially, “are meant to be here, exactly on this day, at precisely this time.” And as strange as it may sound, we believed him without question. Anxious and keen at the same time, I listened as Oberlohr spelled out the rules of The Game. There really was just one: We had to shout “Game, game, game!” whenever one of us became a part of the proceedings. Oberlohr himself, however, had devised elaborate methods to choose his participants. “Everybody stand up,” he said. “Which of your neighbors looks more interesting?” One of those interesting people would then say a random number and, counting the others still standing, the next player was chosen. Dizzying indeed.

As the evening unfolded, more and more of the audience got sucked into the action. Oberlohr would ask someone to draw whatever crossed their mind on a slip of paper, and then state what they had doodled – blindfolded. He was at pains to point out that none of the participants were actors – or in on the joke. Something I can con rm, as I was chosen to sit on stage and think about my favorite song. “Game, game, game!” Others were told to silently reminisce about their childhood days, plan their holidays or just draw whatever they wanted. And indeed, with uncanny precision, Oberlohr would surmise what we were thinking, hearing or imagining.

Finally, Alors On Danse, the song I had silently focused on for the last 10 minutes, abruptly blasted out of the speakers, and everyone danced. It did indeed feel like I was supposed to be there, at that time, on that evening. Whether that’s true or not, the master illusionist had definitely done an illuminating job.

You like local independent journalism in English? So do we!

To keep providing you with current news, insights, opinion and Schmäh about our shared hometown, we need your help. We chose to provide our daily coverage for free, because we believe in equal access to information. And we want to be independent from our advertisers, so we can deliver the news that you want. With your help, we can keep giving you the open, independent journalism you deserve.

If you’re able, please support Metropole today from as little as €1
or choose an amount: 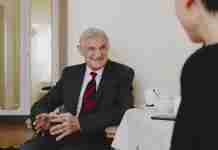