The public trust in government has fallen to abysmal lows following a tumultuous year, with the government responses to the pandemic falling short for a public that judges it unable to  provide adequate solutions to management of the disease, at the same time that a new corruption scandal is looming over the heads of the ÖVP leadership.

Conducted over the last 11 months, the study by the University of Vienna’s “Austrian Corona Panel Project” recorded a substantial decline in public trust in government, falling from 67% in March of 2020 to 28% in January of 2021.

According to the report, the research was based on a panel survey with a sample of 1500, representing the socio-demographic structure of the Austrian population, interviewed at regular intervals to monitor changes over time as circumstances changed.

For the first four months the data was collected on a weekly basis, with the intervals increased in August, after which the interviews were conducted monthly. The form contains a set of core questions, which were expanded with more in-depth inquires, adapted for every new phase of the pandemic. By doing this the scientists were able to monitor changes for a number of important trends, such as family, work, politics or media.

This drop in public trust comes less than two years after the infamous Ibiza affair and the subsequent collapse of the ÖVP/FPÖ coalition. After forming a new coalition with the “Greens” and reinstating Kurz as chancellor, it appeared that the government has managed to escape the cloud of scandal that followed.

However, recent allegations of misconduct within the ÖVP have again cast a shadow on the integrity of the current administration. An investigation revealed that in 2017, the same year H.C. Strache and Johann Gudenus´meeting with the sting operative took place, another corruption plot was developing behind the scenes. In a meeting with Gernot Blümel, Harald Neumann the then-CEO of the gambling company Novomatic, is alleged to have asked for governments help with outstanding tax payments in Italy, in exchange for illegal donations to the ÖVP and groups associated with the party.

In February of this year, the office of the Prosecutor for Economic Affairs and Corruption (WKStA) officially named the finance minister Gernot Blümel as a suspect in its investigation into the Casino affair and conducted a warranted search of his estate.

“The investigations are based on the suspicion that a responsible person of a gambling company offered donations to a political party in return for the support of officials of the Republic of Austria in a tax claim abroad that threatened the company,” the WKStA divulged in a press release on the 11.02.2021.

In a press conference following the search of his house, Blümel confirmed that he had a meeting with Neumann, but denied accepting donations from Novomatic. “Since I became the Chairman of the Vienna Section of the ÖVP and Sebastian Kurz the federal party chairman, there have been no donations to the party.” he said.

Blümel has already been questioned by a parliament committee investigating the Ibiza affair in June of 2020, during which he answered more than 80 questions with “I can’t remember.” In light of the recent developments, these past statements have prompted the opposition to press charges for false statements during the June 25, 2020 inquiry. In retrospect, the irony is hard to overlook: Back in 2019, following the Ibiza affair, Chancellor Sebastian Kurz was quick to distance himself, proclaiming, “Enough is enough!”  But with his own party now again embroiled in scandal, it will be a harder claim to make. 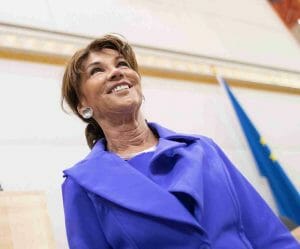 Join Christoph Waltz at the Viennale 2017