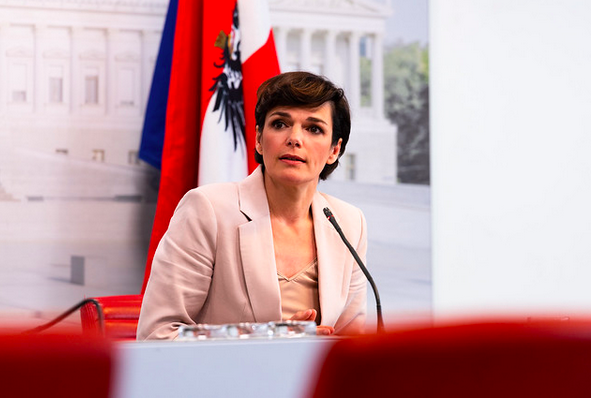 The SPÖ Party leader risked everything on a vote of confidence – and won. Then the sniping began.

“A week in politics,” said Margaret Thatcher, “is a very long time.” In our Austria – not renowned for velocity, political or otherwise – 24 hours can be a very long time. Thursday May 7, the media were full of a freshly confident Pamela Rendi-Wagner, the SPÖ (Social Democrats) leader, radiating political empowerment: She had staked her political future on a vote of confidence among 160,000 paid-up party members, and they had voted her a clear 71%. “Now we can get to work,” she proclaimed.

Just 24 hours later confusion began closing in.  Five of the electoral commission’s 14 members had refused to sign off on the results, and rumors were soon buzzing like wasps round the jam pot. “SPÖ referendum in doubt,” proclaimed the daily Die Presse. There were indeed reasons to be skeptical: An historically high participation rate that seemed barely credible, and a complicated and somewhat murky vote counting logistic, all fueled claims of manipulation.  Rendi-Wagner’s brief moment of glory was already sullied.

Not an Acceptable Chancellor

The backstory is all too familiar in party politics.  After a disastrous general election defeat, all fingers point at the leader: Is he or she to blame? Should they stay or go? The grand old SPÖ has been the ruling party in 18 of the 23 Austrian governments since 1945, alone or in coalition. In the September 2019 national election, they only reached 22% and were forced into opposition.  Current polls put the party at 16%, only just ahead of the disgraced FPÖ (hard right).  Under normal circumstances the leader of the main opposition party is in a good position to score points and cement the support of their own party behind them.

But these are not normal circumstances. The government’s handling of the C-crisis has brought the ruling ÖVP an impregnable popularity (48% if the election were next Sunday). Even worse for the hapless Rendi-Wagner: Sebastian Kurz has a personal rating as Chancellor of 55%, her support as Chancellor in waiting is only 8%, level-pegging with the Green’s Walter Kogler and the FPÖ’s Norbert Hofer. And although she is a respected doctor specializing in virology, she has not been able to translate her expertise into potential votes, even as the C-virus rages. This is not the stuff to inspire the party foot soldiers.

Pamela Rendi-Wagner has most of the makings of a successful politician.  She is smart, when she speaks, her thoughts are clear and well marshaled.  She radiates an authentic and basic decency, respected by friend and foe alike.  She is a handsome woman, slim and well turned out in business-like trouser suits, her short gamin hairstyle always looking just right. She seems immensely likeable.

No branding, no standing

And yet she clearly has implacable enemies within her own party.  Why? The most immediate answer is that she has not managed to mobilize her assets as vote-catchers. And when the party loses an election, its parliamentarians and functionaries lose their livelihoods.  Not the way to keep friends.

Part of the problem is that Rendi-Wagner has not yet found her best fitting political identity; her “positioning” in crude marketing speak. A quick review of the party posters at the last election shows up her blurry profile. Kanzler Sebastian Kurz is the determined Macher, the can-do man.  Werner Kogler is the bluff and honest Green idealist, FPÖ man Norbert Hofer the “Austrians first” populist.  Scrambling to find an unoccupied niche, the SPÖ tacticians made her into a Mrs. Nice, Menschlichkeit siegt (loosely, “It’s caring that counts”). Soft and cuddly perhaps, but not very stirring.  Incidental note: This correspondent has experienced Rendi-Wagner up close at a meet-the press-moment. In reality she has impressive steely determination. Perhaps this is what voters have missed so far.

Back to the battleground. The formal complaints about the SPÖ party referendum were quickly dealt with: The commercial research companies that had run the election opened up their books and everything seems to have been kosher. The five dissenting members of the commission withdrew their objections and even the senior party officials who had opposed the vote in the first place, grudgingly endorsed the results.

Make or break for the party

It was now time for Rendi-Wagner to go back on the attack.  “They [the critics] are operating under the cloak of anonymity,” she told the ORF, “that is not fair.” She regarded their behavior as unacceptably destructive for the SPÖ and when asked whether “this small group” would be ejected from the party, she murmured darkly: “There could be consequences.”  It is assumed that she knows exactly who they are. And where they live.

Whatever happens in the next few days and weeks, the political damage has already been done. Instead of a fresh new start as the ordained leader of the parliamentary opposition, she must continue to clean out treachery in her own house. The daily Der Standard, a loyal but critical friend of the SPÖ, sees this as a make-or-break moment for the party:

If the Social Democrats don’t get their act together this time, wrote Gerald John “it will mean nothing less than a crash into irrelevance.”