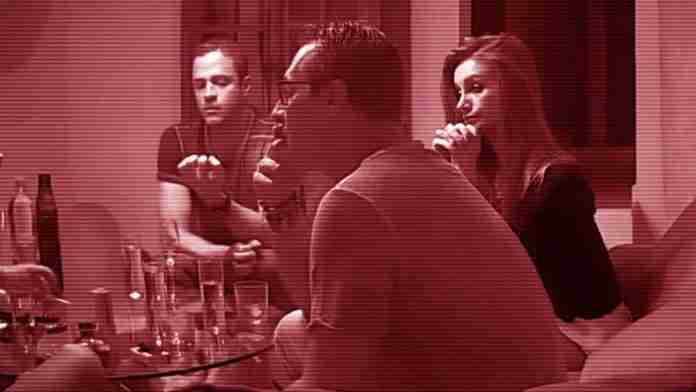 An explosive video about Heinz-Christian Strache and Johann Gudenus published by German media outlets has unleashed a firestorm in Austrian politics.

After a nearly six hour delay, Chancellor Kurz announced that there would be new elections in Austria. He cited his desire to remain true to himself, and said also that in his conversations with the Freedom Party, they had not given the impression of being willing to make any fundamental change other than the resignation of Strache and Gudenus.

In a hastily organized press conference, Strache initially positioned himself as a victim of dirty campaigning. Quotes were “taken out of context,” and no money changed hands, stressing that he insisted no laws be broken during the conversation and that he has not committed any crimes.

He also demanded the illegal video be released in its entirety, before eventually admitting that he was drunk (Es war eine besoffene Geschichte) and wanted to impress his “attractive host.” (attraktive Gastgeberin) with “typical alcohol-induced machismo” (typisch alkoholbedingtes Machogehabe) and that he was “bragging like a teenager” (prahlerisch wie ein Teenager verhalten). He then apologized to his wife before announcing he will sue and clear his name, emphasizing the only crime committed was the illegal sting operation, which is a targeted political attack against him. Nonetheless, he admitted his behaviour was “stupid, irresponsible and a mistake.” (Es war dumm, es war unverantwortlich, und es war ein Fehler).

He then praised the work of his party over the last 14 years and their cooperation with their coalition partner, and that he refuses to let his misbehaviour become a pretext to bring down the administration. To prevent that, he stated he had met with chancellor Kurz at 11:00 this morning, where he had offered his resignation, and that Kurz would accept it. This Sunday, he would also step down as leader of the FPÖ, with his deputy, transit minister Norbert Hofer taking over. Finally, he apologized to everyone he dissappointed with his behaviour, while thanking his supporters and staff for their hard work and loyalty.

Videos secretly recorded in 2017 and recently provided to two German media outlets show current vice-chancellor Heinz-Christian Strache from the Freedom Party (FPÖ) and fellow party member Johann Gudenus in a conversation with a woman speaking Russian and English in a luxurious villa in Ibiza. What both men did not know at the time is that their entire exchange was recorded by hidden cameras – and that the woman, supposedly the niece of a purported Russian millionaire and oligarch, was a decoy.

In the video, the woman offers the two FPÖ politicians campaign support for the Austrian parliamentary elections scheduled for October 2017, in exchange for public contracts. Strache takes up her offer and goes further. In the conversation, he welcomes schemes that would allow the Freedom Party to do in Austria “what Orbán did with the media landscape in Hungary” by buying the country’s largest daily newspaper, the Kronen Zeitung, with the intention of turning it into an FPÖ mouthpiece and privatizing the ORF, Austria’s public broadcaster.

While initial reactions from the governing parties have been muted, chancellor Sebastian Kurz (ÖVP) announced a press conference for Saturday, May 18. Opposition parties and leading journalists lost no time in calling for Strache’s immediate resignation or even snap elections. The ORF showed the tapes in full in its evening news broadcast, the ZiB 2.

Here are some of the explosive Strache quotes from the video:

“We want to create a media landscape like Orbán.” [ed. Prime Minister of Hungary].

Strache states that he intends to transform Austria’s media landscape after the model of Hungary’s Prime Minister Viktor Orbán, who has muzzled the free press and turned TV stations, radio and newspapers basically into mouthpieces of the government and his Fidesz party.

The Kronen Zeitung is Austria’s most popular daily newspaper with more than 2 million readers daily, in a country of 8.8 million.

“You tell her, if she takes over the Kronen Zeitung three weeks before the elections and pushes us to the first place, then we can talk about everything.”

Strache states that he wants to take over the country’s biggest newspaper to bring it on FPÖ party line and finish first in the elections. He also goes on to promise the woman overpriced public contracts and other sweet deals.

“Then she can establish a company like Strabag. Because all public contracts that the Strabag gets now will then go to her company.”

Strache promises to divert public infrastructure contracts from the Strabag, one of Austria’s biggest construction companies whose owner supports the Austrian NEOS party, and instead assign them to the Russian oligarch’s to-be-founded shell company – no matter the price tag.

Further quotes show Strache proposing schemes for funneling money to the FPÖ without disclosing these funds officially as party donations. He also lists other purported billionaire supporters who would use this illicit way to fund his party (all mentioned individuals and companies have so far fiercely repudiated these claims).
Observers, politicians and journalists immediately called the vice-chancellor’s position and even the stability of the Austrian government coalition into question. The press conference of chancellor Sebastian Kurz (ÖVP) on Saturday, May 18 might bring more clarity in this regard.

Strache and Gudenus reportedly responded with nearly identical written statements, nothing that they had emphasized the need to act in conformance with Austrian law. The FPÖ’s General Secretary Christian Hafenecker also said that the FPÖ has “never received any advantages from these persons nor granted any.”

The videos were originally provided to the Bavarian daily Sueddeutschezeitung (SZ) and later, independently to Der Spiegel, according to the SZ, and this past week, shared with the Viennese weekly, Falter. The three publications have agreed to cooperate on the research. No fees were paid for the material. The German papers had the authenticity of the videos confirmed by the Fraunhofer-Institut for Secure Information Technology (SIT) in Darmstadt and a second certified appraiser (Sachverständiger) of digital forensics. Neither found any evidence of manipulation. An authorized translator and an outside attorney were also engaged.

We will keep updating this story as new developments unfold.

(in an earlier version of this article, we wrote that Hofer would take over as vice-chancellor. This was incorrect, which is why we took down the information.)

The Editorshttps://metropole.at/shop
This was written by the Metropole editorial Team. Sometimes its an expat, sometimes a native, most of the time the lines are blurred, and sometimes we're sharing someone else's content, but we always say so. Oh yeah, and buy our magazine! Thanks.
NewsVienna News
Previous articleCome out and Play!
Next articleMind Matters | Our Top Picks for the Biennale