On Halloween, Jesse Inman’s Smallest Theatre in the World #3 defies the rules of sanity and theater

The dark courtyard of the Sigmund Freud Museum is deadly quiet at 22:00 – hardly the place you’d expect to enjoy some experimental theater. Yet here I was, standing outside a tiny wooden cabin along with another audience member I had just met. The dim light shining through a crack in the door proved we were expected; and sure enough, upon entering we were greeted by a wide-eyed, bearded man huddled in a corner, inviting us into his claustrophobic approximation of a cozy English living room for some tea. Little did we know that for the next 45 minutes, we would get way more than a cuppa.

The Schauspielhaus takes pride in stretching the boundaries of drama, and ensemble member Jesse Inman’s Smallest Theatre in the World #3: Murder, definitely pushes the envelope. A one-man-show for an audience of two complete strangers, it’s both a meditation on the nature of serial killers and a homage to Fritz Lang’s influential German thriller M, where child murderer Hans Beckert – played by the baby-faced Peter Lorre – is chased throughout interwar Berlin by both the police and fellow criminals. Adding a healthy dose of societal criticism into the mix, M argues that the killer is trapped in his own mind with no choice but to commit such horrendous acts – unlike the career criminals that presume to judge him. Far from rendering him sympathetic, it only amplifies his depravity.

A deranged mind
Fascinated by the classic 1931 film thanks to a passing resemblance to
its starring actor Peter Lorre, Inman crafts a chilling portrayal of Lorre’s infamous child murderer, playing off a screen in the right corner that sometimes shows scenes from the film, sometimes Inman himself. Both personas gradually fuse, blurring the distinction between the two as Inman’s character converses with Lorre and his own multiple personalities onscreen. The close proximity of actor and audience makes Inman’s killer both relatable and more menacing: he seems almost normal when playing the host and offering biscuits, but when he picks up a little mirror to gaze menacingly into his own eyes, the tiny space closes in, making you very much aware that you’re staring into a deranged mind. Inman’s obsessive delivery maintains a rhythm and pathos that grips your attention, leaving you in the unyielding grip of a psychopathic killer; by the time he gets to his impassioned monologue defending himself, you’re thoroughly entranced – and repulsed.

A performance this intense leaves you drained; after it ended, Inman handed each of us a balloon, Beckert’s preferred method of endearing himself to his quarry. We quietly stood outside the makeshift venue, too afraid to clap, talk or make any noise… who knows what might be lurking in the dark.

Raise the Red Flag – How the Viennese celebrate May Day 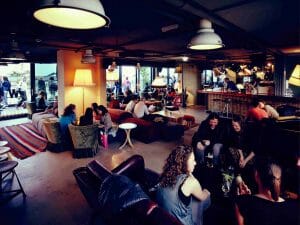