It’s a year now since the Central European University (CEU) opened its doors in Vienna. Established in Prague in 1991 and proudly moved to Budapest, the home town of Hungarian-American philanthropist George Soros in 1995, its goal was to educate a new generation of leaders in newly democratic Central and Eastern Europe, to promote openness and heal historical wounds among neighboring countries.

The decision to move to Vienna was originally a story of loss – to both Budapest and the CEU – a sad ballad, a case of political exile from the adversarial government of Prime Minister Viktor Orbán, who has increasingly challenged institutions fostering free speech and open discourse, in universities, broadcasting, and print and online media.

But what was a tragic turn of events for the Soros-funded university is a refreshing addition to Vienna’s intellectual life. And for some on the faculty, the move is, in hindsight, seen as their lucky star. After the political pressures forcing the move, the welcoming attitude of the City of Vienna has been highly appreciated.

At the same time, CEU’s departure was a tremendous loss for the Hungarian academic scene and also a personal one for many people working for CEU who are determined to keep their Hungarian connections after the move. Many foreign staff bought flats in Budapest, learned Hungarian and acquired citizenship. Those with small children should be able to integrate more easily in Vienna, but for those with children in high school, the move can mean the separation of families.

Still, at the end of the day, with the common historical legacies, Central Europe is big enough to accommodate CEU in both Budapest and Vienna.

The new university campus in Favoriten is functional but only provisional before the university moves to stately grounds of the former Steinhof hospital on Baumgartnerhöhe in the 14th district by 2025. Still, the modern former bank building on Quellenstraße is very different from the historic and prestigious buildings in downtown Budapest, which had been home to CEU for almost three decades.

As a boy, András Bozóki, professor of political science at CEU, was told by his father: “Look at the map of Europe, and first learn German.” A former culture minister, his personal challenge now is to revive those long-gone snippets of the language. The language will not be a barrier though, Bozóki says. Academic conversations take place in English, no matter the location. In fact, he says, being freed from the day-to-day trauma of Hungary’s political realities will give him more time to concentrate on his work. “It’s time not to get ticked off by the day,” he said.

CEU does not want to keep step with Austrian universities in holding classes during COVID-19, even though having the majority of its students coming from outside the EU makes this complicated. Still, Bozóki hopes that he and his colleagues will be able to cooperate with Austrian institutions, fulfilling the CEU’s mission of building and defending academic freedom and open societies in the wider region.

Possibly the biggest change for CEU is launching an undergraduate program for the first time – required under Austrian education law – complementing the masters and PhD programs it had offered in Budapest. The new programs will be made up of small and interdisciplinary cohorts that prepare students for graduate education. The focus is on individual attention and experiential learning, both inside and outside the classroom.

András Bozóki lived in Vienna twice before and still enjoys classical tourist places such as Musikverein, Albertina, the Freud Museum or the Wiener Wald. He fancies the terrace of Tel Aviv Cafe on the Donaukanal or kayaking on the Alte Donau.

He feels at home near the Favoriten campus, with the Turkish barber shops bringing back childhood memories.

Families on the Move

Gabi Göbl, coordinator for the Department of History at CEU, is moving to Vienna with her 9-year-old daughter, which makes it more challenging and, she hopes, also more fun. They have been planning the move for months, although they had to wait for the borders to be reopened after the COVID-19 restrictions.

Gőbl has had professional ties to Vienna since 2017, when she was asked to evaluate Hungarian entries for the SozialMarie – the first ever prize for Social Innovation in Europe. The prize rewarded projects and initiatives dealing with politically unpopular topics in Hungary, such as supporting vulnerable and marginalized groups, like people living with addiction or the homeless. With the shrinking space and funding for civil society organizations in Hungary, both the financial support and the recognition SozialMarie provided to projects was much needed, she says.

What she already has learned about the Viennese over the past years through SozialMarie is that even though the standard of living is higher in Vienna than in Eastern European cities, including Budapest, there is a great deal of care toward the underprivileged. There are many private foundations supporting social causes and campaigns, and the state traditionally funds the social sphere far more than governments in most Central and Eastern European countries do.

On a more personal note, she noticed that people on the streets like to chat, although they may not be acquainted with each other, and engage in expressions of discontent if the bus doesn’t run according to schedule, or if the traffic is reorganized without prior notice. However, they do it in a very friendly way, without significant frustration, and so she finds these random interactions quite charming and entertaining.

While leaving Budapest and some of her colleagues there has been difficult, she will keep working in an EU-funded Jean Monnet Network project with Budapest-based colleagues on research focusing on the concept of borders and their changing nature in a “borderless” Europe.

Gabi Gőbl’s pick is the Film Museum next to Albertina, a lovely place to buy old postcards of movie scenes or have a quiet drink, even if the tickets are sold out.

She also enjoys walking through the Prater and having brunch in the garden of the Magdas Hotel, where diversity is an asset with refugee employees.

Andrea Petö, professor at CEU’s Department of Gender Studies, has lived in Vienna before, when she was a fellow at the Institute for Human Sciences in Vienna (IWM) and has a lot of professional contacts here as a result. She was deeply moved by the solidarity of her Austrian colleagues during these past three years, as the future of CEU was increasingly in doubt. And since she speaks German, she is having no difficulty adapting, and has already received a speaking request from the Austrian Academy of Sciences. So Vienna feels like home already.

Pető hopes that CEU Vienna will be a new hub for independent thought, which is no longer encouraged in Hungary. Hundreds of very qualified Hungarian faculty are coming to Vienna for political exile, she says, “but of course our responsibility in the mission statement of CEU remains to also work for a new and freer Hungary.”

The fate of CEU has taught Pető the importance of talking to a wider audience about issues important for society – such as gender. Her two recent books were therefore written for the general reader, in an accessible language but with academic rigor. She has received positive reviews from scholars from all political affiliations other than the far left. Both books initiated very much needed discussion about silenced and forgotten episodes in Hungary’s past: sexual violence during the Second World War and the role of women in the Hungarian Nazi party.

So, what about Budapest? As a token of appreciation to its former city, whose leadership and population tried its best to stand up for the university, CEU left some reference points in Hungary: the Doctoral School of History, the newly founded Democracy Institute and the CEU Library and Archives. These represent the living memory of Budapest’s once famous intellectual hub.

Andrea Pető is a museum person, who already bought an annual membership to the Kunsthistorisches Museum, with a lovely café under the rotunda to chill out.

She is also looking forward to the Hungarian Cultural Institute in Vienna – if they invite scholars from CEU. 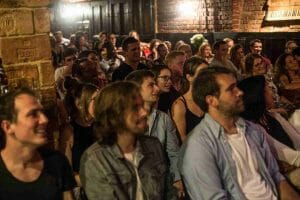