A few lines jotted on a piece of hotel stationary at the Ritz-Carlton in Vienna could be key evidence in the Impeachment proceedings in the United States Senate against President Donald Trump.

The notes, included in a trove of materials supplied to the U.S. House of Representatives, document the role played by Ukranian-American businessman Lev Parnas, a frequent guest at the Ritz-Carlton, as the middle man through whom Trump apparently exerted pressure on Ukranian President Volodymyr Zelensky to investigate Hunter Biden, son of the presidential candidate Senator Joseph Biden, who served on the board of a Ukrainian gas company.

The Articles of Impeachment passed by the US House of Representatives December 19, accuse Trump of abuse of power in withholding authorized US military aid pending Zelensky’s cooperation in the gathering of information to damage Biden’s chances in the 2020 presidential election.

The notes, written in Parnas’ own hand, provide written evidence of Trump’s pressure campaign on Zelensky, something the US president has previously denied. Written evidence is considered by many experts as potentially even stronger than the telephone protocol that triggered the House investigation in the first place.

The two hand written notes were released January 14 to the House Judiciary Committee by Chairman Adam Schiff, along with a letter from the president’s lawyer Rudolf Guiliani to Ukranian President Zelensky in May of 2019 requesting a meeting which he told The New York Times was to the Biden inquiry.

Parnas was indicted on campaign finance charges in October in the midst of the impeachment investigations and was authorized by a Federal judge to hand over his files to the House investigators.

“Jedes Schrifterl, ein Gifterl” – everything you write will come back to bite! – teased the Austrian tabloid Heute with taste of Viennese folk wisdom. 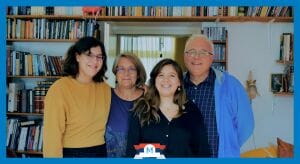