The Wiener Zeitung is losing its funding and the government is not inclined to pay.

It all began with the stroke of a pen, and it may soon end the same way. Austria’s Wiener Zeitung, the world’s oldest newspaper still in print, is likely to cease publishing soon. Emperor Leopold I signed the (then) Wienner Diarium into life in 1703, wishing a journal reporting only the truth and the facts.  Whether he was a rarity in his time, a ruler genuinely nurturing a modern free press, or whether he was creating a house magazine to spin imperial interests, is unclear.  The fact is, the Wiener Zeitung has been a respected and genuinely independent news source, despite being (still) owned by the Austrian state, for now over 300 years.

The first edition of August 8, 1703 told of French troops taking the Venetian pass of Monte Baldo and pressing on to Insbrugg (Innsbruck) and of local militias outside Vienna pushing back Räuber-Gesindl (marauding mobs) coming out of Hungary. Equally important were deaths and arrivals in the imperial city. Even tradespeople got a mention when they died: Johann Rendt, 35, pastry cook, Aug 4 of Lungensucht (tuberculosis). Arrivals counted only the Great and the Good: Aug 1, Herr General Reventlau from Leipzig. The entry for Aug 7 notes laconically: “No one came.” A slow news day.

“Will the world’s oldest newspaper survive?” asked Profil in April, headlining an interview with its current editor. The Wiener Zeitung is not being closed down for heroically resisting some intolerant autocrat, but rather as collateral damage from well-intended Brussels regulations. EU Guidelines 2017/1132 require all member countries to ensure that official government announcements and mandatory declarations from commercial and other organizations (for example, financial reports of publicly quoted corporations) be freely available on digital platforms. The objectives outlined in well-worn business jargon are all perfectly reasonable: “cost efficient … all inclusive and accessible … effective and functional … optimization of competitive markets … social challenges of globalization and digitalization … job creation … mobilization of investments … etc. etc.”  Who could disagree?

The fatal consequences for the Wiener Zeitung are that three-quarters of the newspaper’s revenue has come from just these boring, but legally mandatory, public announcements. If all of this goes online, there is no business plan for survival. Kanzler Kurz has taken a hard line: “It is not the responsibility of the government to finance a newspaper.” Cynics would suggest that control freak Kurz is happy to see any independent voice silenced. The outspoken editor in chief of the weekly Falter, Armin Thurnher, had no doubts: “A declaration of bankruptcy,” he thundered, and went on to point out that the €20 million it would cost to support the condemned paper are nothing beside the €180 million the government spends to keep the mass circulation dailies sweet. But it is always possible that the beleaguered finance minister just welcomed anything that saves him a few million a year.

Admittedly, the Wiener Zeitung is the circulation midget among the serious dailies, its average print run of about 15,000 feeble beside its principal colleagues, Der Standard and Die Presse, which each count between 70,000-80,000. So, of course, it is sad but a bit like the crocodile tears we weep when the last neighborhood grocer closes, even though we’ve all been shopping at Spar or Billa for years.

It is doubly sad because only five years ago, Parliament passed a statute, officially sealing the Wiener Zeitung’s complete editorial independence after 300 years. Cynics may say that the three centuries’ delay only confirms Gustav Mahler’s famous dictum that everything happens later in Vienna. But it was worth the wait – the Wiener Zeitung is a state owned paper that is truly independent.  And Putin PR this is not: The wording of the editorial Blattlinie is clear: To be “equidistant from all political parties and social partners.” Simon Rosner of the editorial governing board put it in perspective: “Our ultimate owner is the Republic of Austria, not the government of the day. Our responsibility is to the citizens.” Important for the journalists is the clear right to work unhindered and – if necessary – to outvote management on the appointment of the editor in chief, a privilege shared by very few other publications around the world.

Freedom of the media has never been a self-evident certainty, but the paper’s robust independence began early during the (relatively) short period of enlightened liberalism under the Emperor Josef II.  When the US Congress passed the 1st Amendment guaranteeing freedom of the press in 1789, the Wiener Zeitung carried an unequivocal report, albeit discreetly placed towards the back.  Even that was gutsy in an age of generally repressive censorship across Europe.

After seven years of silence during the Nazi era, the paper was back on the street in the fall of 1945 with a ringing declaration from the Allied Council of the occupying powers: “The freedom of the press is of great significance for the restoration of Austrian democracy.” All well and good until you read the following paragraphs forbidding any reportage which “endangered military security … insulted the occupying forces … disturbed public order.” Similar Gummiparagraphen (elastic ambiguity) are on show in Budapest, Ankara and Warsaw.

Austria’s national broadcaster ORF suffers periodically from party-political infighting, famously during the brief years of the Black/Blue (ÖVP/FPÖ) coalition 2001-2007. The ORF statute stipulates 15 of the 35 seats on the Stiftungsrat (Board of Trustees) to representatives of the main political parties and another nine are chosen by the government of the day – a pre-programmed journalistic gauntlet, but not a problem the Wiener Zeitung shares. When asked about political pressure, former editor in chief Reinhard Göwell just smiled: “Not the way they do at the Krone.” (Austria’s major tabloid, infamous for bending to fit political whim.)

Today, Austria’s media landscape is generally free from government interference. The Reporteurs sans Frontières Press Freedom Index rates Austria at Nr. 17 in the Good Situation category, behind the Nordics, but close to New Zealand, Canada and Germany (the USA stands at Nr. 44, ahead of Tonga but behind Burkina Faso, the British press at Nr. 33).  Tu felix Austria!

Will the Wiener Zeitung survive? The present Chief Editor Walter Hämmerle understands the big picture: “We’re neither heroes nor victims,” he told the weekly Profil. “A great past is not enough for the future, but we produce a good paper, and we just want to keep on doing it.”

Neustift Am Walde | Town and Country 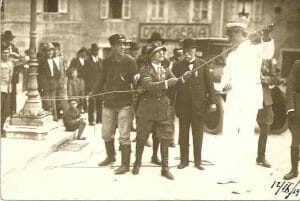