Where else can you answer the call of nature in facilities under Denkmalschütz (historic preservation protection)?

By Bridget Carter and Dardis McNamee

Even the most banal structures can be charming: The pattern of paving stones, the cover of a notebook, the paneling over a doorway or a graceful spout on a teapot – a gesture of grace and a sense of play can make almost anything a design event.

Vienna seems to go out of its way to do this: The Litfaß pillars of exhibition posters; the slate roof of Stephansdom, winter skating through the pathways of the Rathaus Park.

And…. the public toilets – which along with the Habsburg Crypt (Kapuzinergruft) and the Museum of Contraception, are what you might call “alternative” tourist attractions. Where else can you answer the call of nature in facilities under Denkmalschütz (historic preservation protection)? Or have to wait in line for a torchlight tour of the sewage-system? Here in the city of fin de siècle design legend Otto Wagner and of the post-war film noir classic The Third Man, this is just the way it is.

Today, as the city’s public conveniences undergo major renovations, it seems like a good time to take look at this important system on which all our lives depend. When and where you need toilets, Vienna has reserved you a seat.

The rise and fall

The history of Vienna’s sewage system can be traced back to Roman times in about 100 AD when the 13th Legion built a state-of-the-art system of aqueducts and gravity-fed water systems.

Eventually the high standards of Roman hygiene fell into disuse and by the Middle Ages it was common practice for the Viennese (and all Europeans) to dump their waste into the streets, reducing them to a gluey mire of disease infested muck.

As imperial management systems improved so did the city’s sewage system, and as early as 1739 Vienna could boast one of the most advanced in Europe. But by the mid-19th century Vienna’s growing population, as well as improved understanding of the spread of disease, added new pressures for cleaner streets and access to public conveniences. Richard Müller’s pamphlet ‘On Street Cleaning’ reflected a growing disgust for ‘the spectacle of a poorly cleaned city.’ The incorporation of districts II to IX in the 1850s and decision to dismantle the city wall in 1857, created the opportunity. The City Council founded the ‘Urinal Commission’ in 1863, and at its direction, public toilet facilities were installed.

But it wasn’t until Wilhelm Beetz – the brain behind the waterless urinal – when the construction and operation of public lavatories for both men and women were implemented in major public squares. One of his most famous facilities, planned by architect Franz Krasny, includes the last remaining art-nouveau public toilet in Vienna. The 114-year-old underground lavatory on the Graben boasts brass fixtures, marble walls, and wood paneling and is still open for public use.

Visiting a city’s public facilities might not lead the “must see” list in most cities, in Vienna, location for the film noir classic The Third Man, it’s quite the contrary. Set in the war-scarred city of the Four-Power occupation, the 1948 classic, filmed key scenes in the dark undercurrents of the city’s sewer. Today visitors can join a The Third Man walking tour descending the stone spiral steps into the massive arched vaults below the Naschmarkt built following an outbreak of cholera in the 1830s, to place the city’s tributary streams and rivers underground and collect the sewage from farmland and city in a sanitary system of “cholera canals” to treat and carry the waste water out to the Danube. 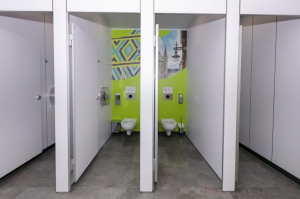 A flow of music

Some might say Vienna experienced the loss of an icon with the closing of the highly kitsch and gaudy ‘Operntoilette’ (‘Opera Toilet’) designed by Friedensreich Hundertwasser (the artist and designer behind the fairy-tale façade of Spittelau waste-incineration-plant). “Everything is so infinitely simple, so infinitely beautiful,” said Hundertwasser. Inside the loo, a continuous loop of the Staatsoper Orchestra playing the “Blue Danube Waltz” flowed from the speakers: the most acts can, and should, be enhanced by beauty, he might have argued.

The unusual toilets were unveiled in 2000 at the Opernpassage and quickly became a tourist attraction, though not without controversary. For one thing, the men’s urinals were shaped like female lips. For another, the whole setup, some said, was a mockery of operatic art. Faced with the cost of renovation, the city eventually agreed, and the facility closed in January.

Today, the city is putting its resources less into the artistic setting, and more into clean and well-placed public toilets. Wiener Linien introduced the first newly designed toilet facilities in the Stephansplatz U-bahn station last month, complete with polished fixtures, modern art décor, and service personnel. An additional five W.C.s serviced by Sanifair will open by 2020 in the Praterstern, Karlsplatz, Schwedenplatz, Volkstheater, and Westbahnhof stations.

In addition, a 50-cent entry will also produce a 30-cent voucher that can be redeemed at various vending machines and participating partners such as Burger King, Interspar, Manner Shops, and Wiener Feinbäcker, among others. For now, there will be no vouchers at the unattended WC locations (still be 50 cents), but plans are in the works for redesigning these facilities as well.

In other changes, the number of public conveniences operated by Wiener Linien in the underground stations will gradually decrease from 54 to 31, but access will be 24/7. The six staffed WC locations will be open from 6:00 to 23:00 hours, with access to the handicap facility for all customers outside opening hours.

So there you have it: Vienna has a way of taking even its most standard and perhaps least appealing amenities and refining them into works of art and cultural icons. And do their best to be there, when and where you need it.

Bridget Carter
Bridget Carter is an international relations graduate student at Webster Vienna Private University where her areas of focus include post-conflict development and gender dimensions of migration. She was born in Texas, grew up in California, lived in Bangkok, and now calls Vienna home. She is an avid traveler, inspirational-reads enthusiast, and health-food junkie. She also likes to step out on foot and marvel at the common, and not-so-common, wonders of Vienna.
NewsVienna News
Previous articleCentral European University (CEU) – U.S. Degree in Vienna
Next articleFall 2019 | City Planning Masterpiece