History has a way of drawing you in. Lords and ladies, knights and squires continue to mesmerize, with shows like Game of Thrones perpetuating our fascination with days past, or at least how we envision them. If you ever fantasized about the lives of nobles, wonder no more: Just an hour away from Vienna, the family-owned Burg Bernstein, a medieval stronghold overlooking the gorgeous southern Burgenland, offers detox to city slickers and a taste of days gone by.

The second you check in, you’ll be asked to fill out your contact details in the Rittersaal, the Great Hall and dining room where breakfast is served every morning. Adorned with elegant 17th century stucco ornaments depicting mythological scenes like the flight of Icarus, the hall has no electricity save for one little lamp. When dusk falls, it’s only lit by candles. “We do that on purpose,” Erasmus Almásy smiles while he reaches for a pen. “We think it adds to the charm.” The younger son of the castle’s owners, Alexander and Andrea Almásy, he welcomes each guest in person, greeting them by name. His older brother, Ambros, lives in Vienna and is not involved in the family business, but his sister, Anna, helps him when their parents are away. At the end of the year, they will officially take over. “Anna and I both studied at university in the city and decided to come back afterwards. For me, this is home.”

Burg Bernstein has 10 rooms in various styles, sizes and prices, sporting names like “The Vinzenz Double Room,” “The Princess Suite” or “The Pascha Suite,” which is decorated with paintings of barons and former lords of Bernstein.

A night can cost between €90 to €180 per person, including a scrumptious breakfast with coffee, tea, cheese, ham, eggs, fruits, vegetables and homemade jam. High season is from May until October, with only one room available in winter – the only one with proper heating.

NIGHT AT THE MUSEUM
Taking in guests helps offset the high maintenance costs of the castle – a whopping €100,000 per year. To save money on necessary renovations, several Almásy family members have taken classes in woodworking or upholstery so they can restore their ancestral home themselves.

Perched on a deeply forested hill and set directly into the mountain, castle Bernstein gives you the most amazing view over the Great Hungarian Plains and northern Styria. You’ll find a beautiful garden full of wildflowers and herbs surrounding the castle, along with a huge, stunning chestnut tree. Surviving every change, storm and conflict for over 250 years, locals call it “The Immortal Tree.” It’s been around longer than the Almásys.

The atmosphere is exceptional – it’s hard to complain when you’re sitting on an ostentatious brown leather chair that might be older than all your living relatives combined, staring at a perfect white ceiling gently illuminated by a golden chandelier.

You may even feel a bit embarrassed when you put your shiny new phone and laptop on the smooth surface of a 1,000-year-old writing desk where generations of counts signed important documents – the sense of anachronism can feel jarring. Almásy realizes it can feel alien. “We normally do not call ourselves a ‘hotel’; we like to think about it more like a museum in which you live.” Visitors are allowed to go anywhere they like and can touch anything they want. Those stairs you did not notice before? Let’s go down! That sword mounted on the wall? Perhaps you’d like to see for yourself whether it’s still sharp.

HOME OF THE ENGLISH PATIENT
Burg Bernstein was erected out of local serpentinite in the 9th century by the archbishop of Salzburg, but the fortifications were not built until the 1100s. In the 16th century, a bastion was added, covering all approaches with cannons. Situated strategically in the borderland between Austria and Hungary, the castle changed hands repeatedly, withstanding several sieges. In 1892, then owner Edward O’Egan sold Bernstein castle to Count Eduard von Almásy. “His son Georg had three children,” recounts Erasmus Almásy, “Georgine who got married and left the castle; László, who is known from the movie The English Patient with Ralph Fiennes, was gay and did not have kids. And finally János, who got married to Marie Esterházy who was in a wheelchair and could not have children. But they had a young Verwalterin (steward) at the Burg that they loved very much. Her name was Maria della Pace Kuefstein.” Almásy smiles. “They decided to adopt her. She was my grandmother.”

Most guests – about 60 percent –come from Vienna, but others arrive from further afield, like Donna and Craig Hamilton, retired teachers from Wisconsin who are touring through Europe. “This place here is a piece of living history,” Craig points out. “It is beautifully maintained. It is so fascinating to sleep in a room that has been around for hundreds of years. It is so off the beaten track of tourism. You are living in a castle on the top of a hill. That is it.” “The owners are gracious and attentive. It is the experience of a life time,” Donna adds. “I feel safe here.”

Donna probably hadn’t met Bernstein castle’s two ghosts yet. One of them even has its own room: “The Red Knight,” a fallen count once known as Ivan von Güssing, died there. The other one is called simply “The White Lady.” There are several stories of how she lost her life; the one told by the family is that she was immured alive because her husband caught her cheating. Erasmus Almásy winks. “Once, guests came to us and asked who the actor in the armor was that they saw last night. We told them we do not hire actors. The next day they left.”

Sometimes, when you look at the crumbling brickwork or hear the wind howl through the windows, you can indeed sense the presence of all those who wandered these hallways before. Once the sun sets, castle Bernstein gets very quiet. There is no wifi in the rooms, encouraging you to spend the evening in big comfy beds reading a book or taking a bath in an elegant white tub, staring out into the cold, dark night. From Oct 15-21, Burg Bernstein is even having an “offline week” where guest are required to symbolically turn off their electronic devices before entering the main gate, with daily yoga classes and hikes for anyone willing to participate. Rooms are still available.

“What we offer is a feeling: the awareness of a life and time long gone, the luxury of silence and calm,” Almásy summarizes. “In the early days, this castle protected people from hostile armies and enemies. Today it will act as your guardian against stress, pressure and work.”

AD: Bring a Piece of London Into Your Home 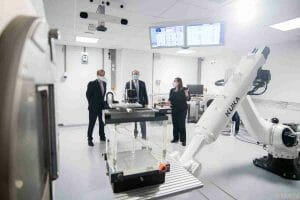