New Year’s Eve at the dawn of the millennium was a memorable occasion for American journalist and historian Anne Applebaum and her husband, Polish Foreign Minister Radosław Sikorski. In their country house outside of Warsaw, they had welcomed diplomats, politicians and other journalists to toast the progress in Central Europe since the fall of the Soviet Union and their optimism about the future. There was much to celebrate: The advance of liberal democracy, the strengthening of the rule of law and the proud fact of NATO membership.

Today, this evening stirs a complicated memory: Many of these same friends have since turned confoundingly toward authoritarianism, a development she would not have predicted at the time. It is with this dramatic image that she begins her latest book, a decisive take on the last decade’s upsurge in strongman leadership, even at the risk of magnifying the role of intellectual elites.

Twilight of Democracy: The Seductive Lure of Authoritarianism is a detailed account of how attractive illiberalism can be in the pursuit of power, making the case that political and intellectual elites are a crucial lens for understanding how democracy is steered off course.

Established as well as younger democracies are facing a crisis of faith in the new millennium, aided by public figures fomenting an “us versus them” attitude with the language of fear and division. A 2020 PEW poll found that 52 percent of people globally are dissatisfied with how democracy works, and in the United States, 75 percent of adults believe other Americans do not trust the federal government. In Central and Eastern Europe, this is often due to public frustration with the way democracy has developed since the fall of communism, amid the harsh adjustments to a largely unregulated free market in the 1990s. Recently, populist appeals to voters with inflammatory language around immigration and national sovereignty have bolstered this distrust.

Applebaum investigates this trend in Hungary, Poland, Spain, the UK and the United States, scrutinizing the choices and attitudes of the powerbrokers who hold the keys, many of whom she knows personally. She is not alone: Observers such as American political scientists Steven Levitsky and Daniel Ziblatt in How Democracies Die and British historian David Runciman in How Democracy Ends argue that for democracy to survive, institutions must be defended from threats that are in plain sight. The authors make the strong case that courts, legislatures, political parties and the media are being eroded in a slow, steady weakening of critical institutions and longstanding political norms. In Twilight of Democracy, Applebaum confronts these threats head on.

The Tyranny of Elites

For Applebaum, societies’ elites play a crucial part in authoritarianism taking root: “No contemporary authoritarian can succeed without … the writers, intellectuals, pamphleteers, bloggers, spin doctors, producers of television programs and creators of memes who can sell his image to the public.” These educated elites are clercs – from Julien Benda’s 1927 book The Treason of the Intellectuals (La trahison des clercs) – fearing “that the writers, journalists, and essayists who had morphed into political … propagandists would goad whole civilizations into acts of violence,” in anticipation of both Josef Stalin and Adolf Hitler.

One figure is Jacek Kurski, who worked at an illegal opposition newspaper with his brother in communist Poland in the 1980s. However, upon the fall of the Iron Curtain, Jacek made a conspiratorial film, sued his brother’s newspaper and was consumed with “resentment, revenge, envy” for being – he thought unfairly – excluded from power in Poland’s first 25 years of independence.

The Law and Justice Party gave him an opportunity: He was appointed director of Poland’s public broadcaster Telewizja Polska in 2015. Throwing objectivity and neutrality to the wind, Telewizja Polska became a vehicle for vendetta. In one case, Jacek’s campaign led a viewer to leap on stage at a charity event and stab the mayor of Gdansk, Pawel Adamowicz, who died the next day from his wounds. It was part of a campaign to contrive new enemies, helping divert blame away from government failings and making its messenger a household name.

Due south, in Budapest, a similar story unfolded with a kindred intellectual and former colleague, Mária Schmidt. A historian of Stalinism, she is director of the House of Terror – a museum dedicated to exploring Hungary’s totalitarian past, in which the tools of oppression are vividly portrayed. With the rise of Hungarian Prime Minister Viktor Orbán, her tone began to shift, and she soon bought Figyelő, a “technically independent” Hungarian magazine that now vigorously promotes the president’s agenda. It equated two Hungarian NGOs, the Hungarian Helsinki Committee and Migration Aid, with the Islamic State and even published a list of the “mercenaries of Soros,” a reference to Hungarian-born philanthropist George Soros, founder of Open Society Foundations.

Schmidt defended her view by laying blame on Western democracies, who overstep by telling other countries how they should govern. It’s what political scientist Ivan Krastev referred to as a “post-colonial” mindset, in which former colonies felt humiliated in merely imitating Western democracy’s structures and values, in not creating systems evolving from their own national traditions.

In reality, Applebaum guesses, it was also simply a pragmatic pursuit of power: As a supporter of the regime, Schmidt has received funding to found museums and two historical institutes, “giving her unique power to shape how Hungarians remember their history.”

The recipe for authoritarianism is in what historian Timothy Snyder characterized as the Medium-Size Lie: “All of them encourage their followers to engage, at least part of the time, with an alternative reality,” she writes, “carefully formulated, with the help of modern marketing techniques, audience segmentation, and social media campaigns.” It is implemented by clercs, like Mária Schmidt and Jacek Kurski.

At the time of this writing, the United States had just undergone an assault on the Capitol in an attempt by outgoing President Trump to interfere with the democratic process and the peaceful transfer of power. It was fed by lies and conspiracy theories, leading people to believe that the election had been stolen, fortifying society’s fissures.

“These groups and movements were also inspired by a conviction that democracy is worthless,” writes Applebaum, “that elections cannot bring real change, and that only the most extreme and desperate actions can stop the decline of a certain vision of America.” Trump’s rhetoric fed people’s worse instincts and an anti-Americanist sentiment that thrives on conspiracy.

Democracy Is a Struggle

Democracy is neither easy, let alone the norm. The default organization of human societies is autocratic, not egalitarian, as Runciman suggests in How Democracy Ends. Still, it is worth the trouble. In a democracy, more fires will be started, he counsels, but more will also be put out.

To help understand society’s predilection for autocracy, Applebaum introduces us to Karen Stenner’s work on authoritarian psychology. Stenner argues that we have a predisposition to loyalty to the group, and an instinctive suspicion of people who are different.

Yet, people can also surprise us – like the defiant throngs in Budapest who rallied in front of Parliament protesting Orbán’s packing the judiciary in 2018, or the crowd-funded media project Telex that was launched to compete with the regime’s narrative and provide Hungarians with evidence-based journalism. Still, authoritarians remain emboldened in Hungary, encouraged by similar political movements across the democracies Applebaum describes.

Propaganda and censorship impede freedom, yet people and systems can rebound. As we have learned from recent critiques of the social media giants, companies profit from divisive language, what many called a “Trump bump” in viewership: For four years, people could hardly tear their eyes away. Nevertheless, discussions on platform regulation and hate speech are stronger than ever. The more we understand, the better our chances.

So, if you want to meet Rafael Bardaji, the creator of the campaign “Make Spain Great Again,” or share a leisurely pint with Boris Johnson – if you want to get to know the personalities who are causing all the trouble – then this is the book for you.

Twilight of Democracy: The Seductive Lure of Authoritarianism 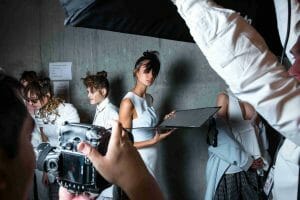 Everything You Need to Know About Trademarking in Design

Are the Viennese More Likely to Cheat on Their Partners?

How to Get Involved in Politics in Austria