Córdoba, Argentina, 1978, Football World Cup; Germany and Austria were playing head-to-head when, in the last two minutes, Austrian Robert Sara passes to teammate Hans Krankl, who dodges the German defense, and shoots. “Tor! Tor! I wer narrisch” (“Goal! Goal! I’m going crazy”) shouts Austrian commentator Edi Finger, as Krankl scores his way into history and into the hearts of his compatriots at home.

The victory over the “big neighbor” unleashed a roar of excitement in Austria. To Germans, it was a “disgrace”; in Austria, to this day, it is known as the “Miracle of Córdoba.” There is even a square in the 21st district of Floridsdorf named “Cordobaplatz” in its memory. And it wasn’t even the finals, only the last game of the intermediate round.

It didn’t matter: This was about something more important. Football has often become the playing field of national differences. And German-Austrian history is characterized by centuries of tensions and competition – the match was just another example.

From Holy Roman Empire to Congress of Vienna

For most of history, there was no Germany or Austria as such. Before the 19th century, a collection of German states covered a geographical area of shifting boundaries in the middle of Europe, including parts of present-day Austria.

From late Middle Ages, “Germans” and “Austrians” were united under the Holy Roman Empire an agglomeration of separate states, loosely joined under an Emperor, or Kaiser. In its prime under the Habsburgs, the Empire, spanned from northern Italy, over Slovenia, present-day Austria, and parts of Germany up to what is today western Poland.

With the invasion of German states by French armies at the end of the 18th century, Prussia and Austria joined forces against Napoleon but were defeated. Several German territories fell under French control and the Holy Roman Empire, which had existed for almost 1,000 years, collapsed. The territory still under Habsburg control became the Austrian Empire.

After Napoleon’s defeat at Waterloo in 1815, representatives from all over Europe met in the Congress of Vienna to rearrange the political map. One result was the uniting of the German kingdoms and the Austrian Empire as a German Confederation, the Deutsche Bund.

In the years following, demands for a unified German Empire grew, along with popular frustrations culminating in the March Revolution of 1848 across the confederation. After a further series of revolts, the movement was violently crushed, suppressing calls for German unity and democratization.

Meanwhile, Prussia and Austria competed for political dominance within the confederation. In the succeeding Austro-Prussian War of 1866, Austria suffered a decisive defeat at the Battle of Königgrätz.

Following Prussia’s victory, its minister-president, Otto von Bismarck, masterminded the unification of the German allies in 1871 into a German Empire – from which Austria-Hungary was excluded. In The years that followed, relations eased back to friendship, and the two empires collaborated in multiple alliance agreements.

As the 20th century dawned, political tensions grew among the major European powers, with Germany working to isolate France and the British fearing the German navy build up in the North Sea. The nations took sides: Austria-Hungary, Germany, the Ottoman Empire and Bulgaria formed an alliance of Central Powers. On the other side, Imperial Russia, France and the United Kingdom allied in the so-called Triple Entente. The assassination of Austrian Archduke Franz Ferdinand in Sarajevo in 1914 triggered World War I. After Austria declared war on Serbia, Germany broadened the conflict by promising full military support — a so-called Blankoscheck (carte blanche) – and together, with great fanfare, they entered the war, with shouts that they would be home by Christmas. Not everyone was happy of course, particularly the wives and families on the farms.

It was a strange time, when many had felt the long decades of peace debilitating and alienating, so that leading intellectuals saw the war as a chance for a kind of cleansing and renewal. To Austrian novelist Robert Musil, “Our time is a time of satisfaction, and satisfaction is always disappointing.” To the German Thomas Mann, “We knew… this world of peace…. Did it not ferment and stink of the decaying matter of civilisation? …War! We felt cleansing, liberation and a tremendous hope.”

After the Allies’ triumph, Germany and Austria were held responsible for the war and got severely punished in the peace treaties that followed: Both empires were dismantled, creating a continent of new republics, often ill prepared for self-government.

Fueled by a bitterness left from the Franco Prussian War, French Foreign Minister Georges Clemenceau insisted Germany be saddled by crippling reparations; Austria lost more than half of its territory, left only with the mostly German-speaking area renamed “Republic of German-Austria,” in Clemenceau’s legendary phrase; “L’Autriche, c’est ce que reste.” – Austria is that which is left. As to the future, treaties prohibited any union between Germany and Austria, Nevertheless, these new Austrians considered themselves part of a greater German nation, with many hoping for unification, paving the way for the Anschluss in 1938.

Even without the reparations, Germany was staggering under war debt; pressured by the French and unable to pay its striking workers, the government simply printed money. Suddenly, inflation spiraled out of control, as people raced to spend their wages before they were worth even less. While not entirely at fault, the Weimar Republic steadily lost the faith of the public, leaving it vulnerable to rallying cries of the Nazi “brownshirts.”

But Germany was not alone, as Fascist movements took root all over Europe. Authoritarian regimes came to power both in Germany (1933) and Austria (1934), and National Socialists on both sides of the border attempted to unite the two.

As the Austrian government refused to bow to the National Socialists, Hitler marched into Austria. Calls for help from the European powers went unheard. Only Mexico, where Franz Josef’s brother Maximilian had briefly reigned, officially objected to the annexation.

When German troops entered Austria in the early hours of March 12, 1938, they met no resistance. Three days later, Adolf Hitler proclaimed the annexation of Austria to the German Reich to excited masses on Heldenplatz. But the Germany they had most likely dreamed of joining was not the one they got.

Welcomed by many that day, it’s impossible today to determine to what degree Austrians were in for or against German occupation. Nevertheless, Austrians were not only victims under the Nazi regime – as later set down by the Allies in the Moscow Declaration of 1943 –but also perpetrators. Many of the leading members of the Nazi regime were Austrian, just as were large parts of the staff that organized the deportations of Jews from all over Europe and worked in the concentration camps.

The Moscow Declaration did much to define postwar Austria, establishing its status as the first victim of Nazi aggression. It also included a passage on Austria’s co-responsibility in the war. But this was quickly forgotten, and it would be decades before Austrians began a deeper conversation about their role in the Holocaust.

Post-War and Rapprochement in the EU

At the end of the Second World War, the Allied powers removed Austria from the Third Reich and divided each country into four governing zones (British, French, American and Soviet). While the Allies saw Austria as a “liberated country,” freed from Nazi oppression, Austria, too was divided and became fully independent only with the State Treaty in 1955.

Compared to Germany, however, Austria in some ways received preferential treatment after the war. Austria’s democratic constitution was soon reinstated, and the country was able to freely elect a democratic government in late 1945. The occupation of Germany ended in 1949 by creating the Federal Republic of Germany (West Germany) and in the Soviet Zone, the German Democratic Republic (East Germany).

The separation from Germany formed a basis for Austria’s new self-image. To this day, the Austrian federal coat of arms shows an eagle with broken chains on its feet, as a symbol of liberation from the National Socialist dictatorship. Austrian politicians embraced the “victim theory” with relatively little public criticism, and for a long time, Austria kept its distance. It took nearly ten years before the two nations officially resumed diplomatic relations.

With growing economic ties and mass tourism to Austria, the relationship improved in the 1960s and 1970s. Similarly, the two social-democratic chancellors, Willy Brandt and Bruno Kreisky, close friends since their time in exile in Sweden, promoted close cooperation, while Kreisky became the first Western head of government to visit the GDR (East Germany).

Austria also played a crucial role in helping GDR citizens who wanted to escape to the West from Hungary. This climaxed at the Pan-European Picnic, organized by the EU parliamentarian Otto Habsburg in 1989, when the Hungarian-Austrian border was opened for three hours and, with the approval of the authorities in the two countries, hundreds of East Germans fled to the West. Today, this picnic is seen as an essential milestone in the series of events that led to the fall of the Berlin Wall and German reunification.

The refugee crisis of 2015 was a severe test, with the Austrian government repeatedly criticizing Germany’s migration policy as too loose. More recently, border controls between European countries, including between Austria and Germany, have been tightened. Recent discussions on corona aid payments within the EU led to differences. However, the temporary closure of the borders during the pandemic also made the close relationship between the people of the two nations all the more visible.

Today, Austrians and Germans are probably closer than ever before. Their economies are strongly intertwined: Germany is Austria’s most important market and every year thousands migrate between the two states.

Germany and Austria have an old relationship, burdened with a complex history as allies but also enemies and also of shared horror: In some respects, this past is still present, and hangs over both houses as a spur to do better in the days to come. If this year has taught us one thing, it is that it is impossible to predict what will come. Maybe this shared legacy will lead to a brighter future for both.

Legend has it, that after the 1978 Football World Cup in Argentina, the German and Austrian teams flew home together in the same plane. It is said that, apart from teasing each other, the two teams got along well. Unfortunately, this isn’t completely true. Only some Austrian players flew with the German team and just until changing connections in Brazil.

Still, on this short flight, Sepp Maier from the German team offered the Austrian player Koncilia some of his beloved Schnupftabak (snuff tobacco) and the German Helmut Schön congratulated the Austrians on their victory.

So while the truth may be less than the legend, it may be the better version for understanding the German-Austrian relationship, characterized by competition and teasing. In the end, they somehow sort out their differences and get along – and maybe that’s what makes it so special. 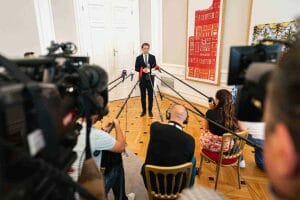