The surrounding cultural heritage invites us to take many pictures, especially in the smartphone age. Here what’s allowed and what isn’t.

Austria’s cultural heritage is an important component of the country’s identity and a key driver of its strong tourism industry. In 2017, Vienna’s hospitality sector logged more than 15.5 million over-night stays. The city’s imperial past as the capital of balls and classical music, its grand palaces, romantic gardens and splendid boulevards, certainly play an important part in its allure.

And inevitably, posing for pictures in front of architectural marvels and works of public art has played a central role since the invention of photography. But the combination of smartphones and social networks – giving rise to contemporary “selfie culture” – has propelled this to unprecedented heights. What’s more, the richness of the setting delivers a picturesque backdrop for commercial film productions and photo shoots.

Here, questions of copyright law arise: Can tourists freely and lawfully depict the works of world-famous architects and sculptors in photos and videos – that they then post online – without fear of breaking the law? And can professional photographers and film producers do the same for commercial purposes?

With Austria’s most famous attractions, the palaces, statues and public works buildings dating from the country’s imperial mes, the answer is simple: Protection for works of art under copyright law, including sculptures and works of architecture, is restricted to 70 years after their creator’s death. Thus, the 19th century splendor of Vienna and other cities and towns can be freely reproduced, distributed and published in any commercial or noncommercial setting.

However, there are other, newer attractions drawing visitors to places such as the MuseumsQuartier Vienna, the dramatic new campus of the WU (Vienna University of Economics and Business) designed by world-famous architects, and the contemporary public art throughout the country, such as the landscape interventions by the art collective Gelitin. In these cases, photos or videos may conflict with the protections under copyright law.

This is where the principle of “freedom of panorama” – “Freiheit des Straßenbildes” under Austrian law – comes into play. This limitation of copyright, commonly known as “Panoramafreiheit,” which is governed by §54 Z.5 of the Austrian copyright law, states that any work of visual art that was created with the intention of being permanently displayed in a public space can be freely reproduced, even for commercial purposes. These include architectural works like buildings, bridges and fountains, but also sculptures, statues, murals, and other tangible pieces of visual art in public places.

In contrast architecture, this second category of artworks must be in a “place serving public traffic.” This means that while buildings are covered by the freedom of panorama even if they are located on private land, as long as they are visible from a public place or thoroughfare, other works of visual art must be permanently located in public spaces to qualify under this limitation of copyright. The qualification that they be created with the intention of permanent display in a public space means that sculptures displayed as part of a cultural festival, for example, do not qualify under freedom of panorama.

However, freedom of panorama should give photographers and videographers – hobbyists and professionals alike – peace of mind about capturing images of the beautiful or grittier sides of Austria’s public places. Still, this may not be the case elsewhere, because even though most of Europe has some variation of this principle, the regulations are not uniform from country to country. When in doubt, it’s always best to check. 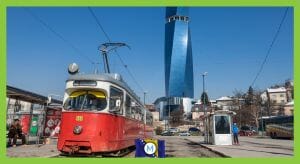 Made for Each Other | Bosnians and Vienna

Leading the Crazy Ones