The elections have been fought, the winners and losers on the record. Now all eyes are turning to the decisive coalition negotiations.

The impressive election victory of the People’s Party (ÖVP), who won 37.5% of the vote, leaves party chief Sebastian Kurz as the undisputed contender for the chancellorship. Out of a total of 183 parliamentary seats, the ÖVP won 71. For a governing majority, a total of 92 MPs are needed. The People’s Party can get there with the Social Democratic SPÖ (21.2% or 40 seats), the Freedom Party (16.2% or 21 seats), or the Greens (13.9% or 26 seats).

So, which one shall it be? Here is a sample of Austrian media reactions to the elections – along with their predictions regarding the upcoming coalition negotiations.

“How Green Can Kurz Be?” 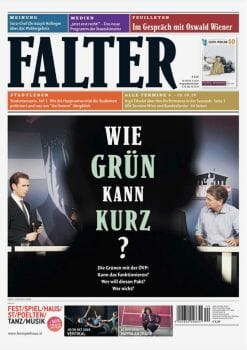 The Greens and the ÖVP: Can that work? Who wants this pact? Who doesn’t?

Armin Thurnher, editor-in-chief of the left-leaning city weekly Falter, sees the turquoise-green coalition going from “mathematically impossible to the choice of the media.” Thurnher maintains – playing with the ÖVP’s color switch from black to turquoise –that “Black-Blue is discredited, Black-Red is dead, or at least talked into the ground. Black-Green is à la mode.”

Seventeen years ago, he writes, when then-chancellor and ÖVP chief Wolfgang Schüssel talked to the Greens under party leader Alexander Van der Bellen, they still needed lots of prodding. Now instead, these talks are obvious and expected. Thurnher also speculates that Kurz may even appreciate the chance to present himself as a vanguard for a coalition between Christian Democrats and Greens; but he also warns that the idealism of the Greens and Kurz’s power-oriented pragmatism may in the end scupper the deal – and bring the FPÖ back to power.

“This Election Is Not Important” 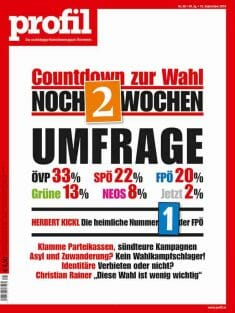 The destiny of the Republic will be decided after September 29. By Kurz.

Profil editor-in-chief Christian Rainer sees the ball – and responsibility – in Kurz’s court, and that it was even before the elections. For him, it all boils down to the crunch question: “With or without the FPÖ?” Rainer sees this both as a question of content and morality. With the FPÖ, Kurz could make a quick deal and continue to govern more or less as before.

With the Greens, Neos or SPÖ, Kurz would have to make concessions. Then again, Rainer maintains, the once-preeminent topic of migration has drifted into the background, climate change and climate protection now take center stage. The main moral question, he writes,  touching on matters of democracy, rule of law, dignity and Austria’s historical relationship with national socialism, is the following: “With whom can the People’s Party rule without damaging itself and the Republic?“

The answer should be obvious – one hopes.

“The Charm of Black-Green is Back”

How can ÖVP and Greens come together? Project Kurz wouldn’t be Kurz’s project anymore. And the Greens would have to become a different party.

Commentator Oliver Pink, a veteran of domestic politics writing in the center-right broadsheet Die Presse, predicts big hurdles for a coalition that he sees as the darling of the media. “Those who voted ÖVP in this election didn’t generally do it to get Black-Green. They want a continuation of turquoise-blue, or perhaps only turquoise, which only differs in nuances from turquoise-blue.”

He predicts a rude awakening for the Greens, who have been among the staunchest critics of “chancellor performer” Kurz and would now have to make difficult compromises. Pink also points to the very different voter bases – while the People’s Party won across the country, in rural areas and small cities, the Green voter base is concentrated in bigger cities and especially in cosmopolitan Vienna.

Yet, he still sees charm in the tie-up – if not least the charm of seeing erstwhile Kurz-critics coming around to laud a government headed by him.

“Sebastian Kurz on a Crossroads” 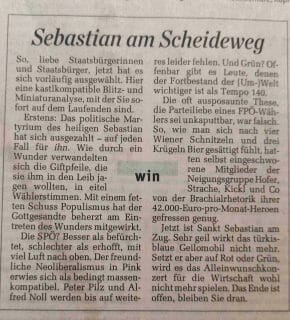 Christoph Windner, editor at the center-left broadsheet Der Standard, penned a witty “Einserkastl” (a daily humorous comment on the newspaper’s frontpage) on the day after the elections. Windner writes “the political martyrdom of the holy Sebastian has paid off – in any case, for him. As by a miracle, the poisoned arrows that were pointed at his body were transformed into votes. With a healthy dose of populism, the one sent by God has done his part in performing the miracle.”

Other parties are also getting their come-uppance: The SPÖ? “Better than feared, worse than hoped, lots of room for improvement.” The Neos? “Only limited mass-appeal.” The Greens? “Apparently there are people who prefer the continued existence of the environment (and world) to a highway speed limit of 140 km/h.”

For the FPÖ, Windner sees the expense account scandal rather as decisive for the steep fall in support, than the Ibiza video – even the most radical rhetoric could not turn Freedom Party politicians into 42,000-euro-per-month-heroes of the people.

Now, it is Saint Sebastian’s turn. And if he turns to the SPÖ or the Greens, the picnic for business will be over. The end is undecided – stay tuned. 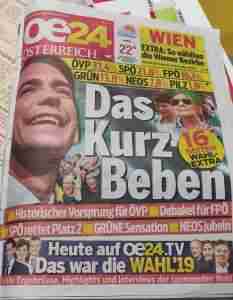 Nikki Fellner, editor-in-chief of the media group Österreich and its daily U-Bahn tabloid, sees their reporting vindicated. “This election – as ÖSTERREICH prophesized – was a true chancellor’s election,” Fellner writes. But he also sees the election results as a vote for the future coalition. The two big winners of the evening were the ÖVP and the Greens, thus they should also govern together.

“Turquoise-Green would be an exciting coalition of the winners!“ Fellner enthuses. The Greens would just have to change their spots on migration, dificult “without majority support”, and get their “loony Viennese regional troop” under control. If they managed this, there would be little in the way of this coalition. Because on the most important issue of all – the climate – Kurz and the Greens are already quite close.

“There are two big victors of this election. So it would only be logical, Fellner closes, if now there would also be a victors’ coalition!”

“Turquoise-Green: Kurz and Kogler have a long way to go” 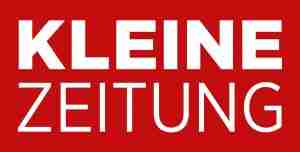 Michael Jungwirth, domestic politics editor at Austria’s second biggest daily, the Kleine Zeitung, sees both promise and problems on the path to a coalition between ÖVP and Greens. Jungwirth describes the very different priorities of Kurz and Kogler, with the former having so far shown next to no interest in environmental matters, let alone the more activist and rebellious form of Green politics. Attempts by ÖVP grandees to convince the former chancellor to get serious about climate protection did not get far.

Franz Fischler, former EU commissioner for Austria and ÖVP doyen, estimates the chances for a black-green coalition at “55 to 45 percent.” Fischler says that both the idealist Viennese Greens and Kurz, who so far has been following a hard line to keep the FPÖ in check, will have to make compromises. Georg Willi, Green mayor of the Tyrolen capital Innsbruck, stressed that the ÖVP has to take the right turn when it comes “climate protection and the Mindestsicherung (needs-based minimum benefits).”

But many Greens also see this as a “once in a century chance” and opportunity, which they are eager to seize. Jungwirth also sees the President, Alexander Van der Bellen, as a key figure – he had to witness black-green negotiations fall apart in 2003 and will now help to make them work, even if behind the scenes.

“We will see how the sect members of the chancellor performer will now comport themselves.”

“We want proper center-right policies and politics, without the gruesome incidents of the far-right.”

The 90’s Alternative Rock Band, Dinosaur Jr. Will be Playing in Vienna on July 20th