Noun. A 2-liter bottle of wine. Stems from doppel (double), indicating that it’s literally a “doubler,” or double-liter bottle. A quintessentially Austrian practice for selling usually low-grade Tafelwein or Landwein, the Doppler has been gradually phased out over the past decade or so and is rarely seen these days.

Reasons for this are myriad, and add up to yet another sign of the decline of civilization: Shifting drinking habits (not many today would drink 2 liters of wine all at once, even with friends – although maybe we should rethink the friends); a surely undeserved reputation as plonk; its popularity among alcoholics (though rarely among hobos, as they go for the even cheaper stuff, sold in cartons); or simply the fact that these bulky bottles don’t fit in the refrigerator.

Still, some places are doing their bit to keep the tradition alive. Particularly the Heuriger (the wine taverns of Vienna and Eastern Austria) who still use Doppler bottles. As they generally sell their own wine, quality is not such an issue, and their large size is more practical on busy days. Many winemakers also use them for bulk sales ab Hof (directly from the vineyard). The stuff intended for retail or export generally goes into the more familiar 0.75 l bouteille.

But even if the Doppler may be fading from the stage outside of gastronomy, it still lives on as a symbol of local drinking culture and good cheer in many Wienerlieder.

Not, of course, to be confused with the “Doppler effect”, in the physics of waves first described by Austrian physicist Christian Doppler in 1842 – which explains why that annoying police siren fades as they drive away, leaving you in peace to get back to your Doppler.

Her mim Doppla! (Pass the doubler!) 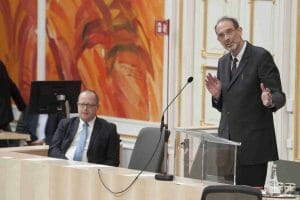 Students to Return to School With Extensive Safety Measures 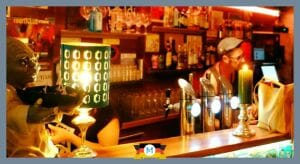 The Best German Restaurants in Vienna