A new InterNations Study ranked Austria one of the unfriendliest countries for expats to settle in. Security and political stability remain strong motivations for moving here

The expat network InterNations asked 12,500 participants about their experiences of living and moving abroad and reanked Austria only the 28th  (out of 65) most popular country to move to. While Austria remains a popular destination for expats, the study also named it the second worst country when it comes to settling in ranking only 64th – one ahead of the caboose Denmark – and the second unfriendliest country, followed by Kuwait.

A whopping 68% of Austrian respondents cited poor German language skills as a significant hurdle, while 9 out of 10 said they speak “a little” to “fluent” German. Especially when it comes to making friends with the natives, Austria seems to make it harder for expats than other countries. While 42% of all expats questioned (albeit a small sample size of around 170 expats in Austria) answered that they had no problems making social connections with their newly found hosts around the globe, only 25% of participants answered that they have found friends among the locals since moving to Austria.

Austria remains highly valued for its security, political stability, education, and healthcare system – nine out of ten Expats (88%) think that Austria is a secure country, 78% thought it politically stable, 84% value the quality of health care and 89% of all participants ranked the education system’s quality as high.

Want to know more? Download the study here. And for a breakdown of demographics in Vienna by district, check out these statistics. 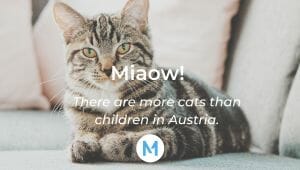 Stats That Matter | Pets in Austria